You are here: Home › News › Bird Poo Spreading Toxic Pollutants
By Will Parker on July 20, 2005 in News 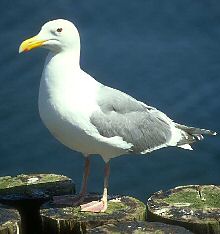 Mother Nature herself may be implicated in a worrying rise in levels of DDT and mercury in otherwise pristine Canadian ecosystems. A new study suggests that the culprits are seabirds that transport and deliver the contaminants in their poo. Surprisingly, the researchers found that the seabirds were responsible for transporting most of the human-made contaminants to some coastal ecosystems. “The effect is to elevate concentrations of pollutants such as mercury and DDT to as much as 60 times that of areas not influenced by seabird populations,” said researcher John Smol, from Queen’s University.

The study, appearing in Science, noted that contaminants washed into the ocean did not, as was believed, cease to affect terrestrial ecosystems. “Our study shows that sea birds, which feed in the ocean but then come back to land, are returning not only with food for their young but with contaminants as well. The contaminants accumulate in their bodies and are released on land,” said study leader Jules Blais. “We now have evidence that seabirds can concentrate industrial contaminants in coastal areas to levels that can be affecting those ecosystems.”

Because of the chemical build up in the food web, the researchers said that some communities in northern Canada are among the most mercury and PCB-exposed people on the globe.

Adding to the concern is the fact that Canada has the longest coastline in the world and seabirds are typically the dominant wildlife found in coastal ecosystems. “Most of Canada’s coastline is at our northern fringe, and northern aboriginal communities rely on these ecosystems as a source of nutrition, economic development, traditional customs, and culture,” noted Blais.