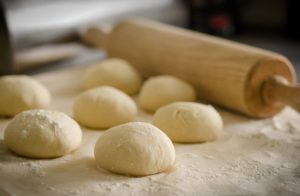 The company announced a flour recall in May 31, 2016 after multiple E. coli outbreaks that are potentially linked to their flour products (Gold Medal, Wondra, and Signature Kitchens). Federal and state health officials are still investigating the outbreaks, which caused 42 cases of illness across 21 states. 11 out of the 42 individuals had been hospitalized.

Although the bacterial strain (E. coli O121) has not been found in any of the recalled General Mills flour products or its flour manufacturing facility, the company has recalled more than 10 million pounds of flour back in June out of precaution.

E. coli O121 is potentially deadly as it can cause bloody diarrhea and dehydration, but it can be avoided by following a few simple rules on safe food handling:

People are usually aware of the danger of eating raw dough because of the risk associated with raw eggs and Salmonella. Salmonella can cause diarrhea, fever, and abdominal cramps that can be life threatening for older adults, infants, and people with compromised immune systems.

But what about flour? Leslie Smoot, a senior advisor in the FDA’s Office of Food Safety and a specialist in the microbiological safety of processed foods said flour comes directly from the field and is typically not treated to kill bacteria. For example, if an animal excretes in the field, the bacteria from the animal’s waste could contaminate the same grain that is harvested and milled into flour.

The flour we find in stores is not necessarily free of harmful bacteria. Some of the common food preparation steps, such as boiling, baking, roasting, microwaving, and frying, kill the harmful bacteria. Raw dough can be dangerous because it has not gone through any of these steps.

The full list of recalled flour products can be found here.