You are here: Home › Humans › News › Blind human echolocators can recognize the shape, size, and material properties of objects, according to new study
By Will Parker on May 25, 2015 in Humans, News 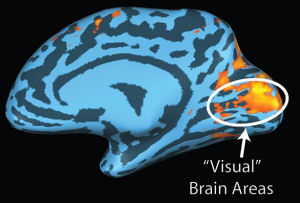 New Canadian research into human echolocation suggests that as well as being able to locate objects, some blind people can also discern the shape and texture of those objects. The new findings, presented last week at the 9th Annual Canadian Neuroscience Meeting in Vancouver, build onprevious work from the UK that established some of the parameters of how echolocationworks in humans.

According to lead researcher Dr. Mel Goodale, from the University of Western Ontario, the new research shows that echolocation in blind individuals is a full form of sensory substitution, and that blind echolocation experts recruit regions of the brain normally associated with visual perception when making echo-based assessments of objects.

While his initial work investigated how echolocators detect the shape and distance of objects, Goodale’s most recent studies have investigated how they perceive the material or “stuff” that different objects are made of. “Remarkably, expert blind echolocators can tell whether something is hard or soft, dense or not, just by listening to the echoes bouncing back from that material,” says Goodale.

Just as object properties (size, expected weight, texture, composition) assessed by visual cues are encoded in different brain regions, Goodale’s work shows that the same is true of information obtained through the auditory cues provided by echolocation. Goodale says that many of the same regions in the sighted brain that are used for the visual assessment of objects are “recruited” in the blind brain when objects are explored using echolocation.

To determine how the brains of echolocators process auditory cues, Goodale’s researchers recorded the echoes produced by an echolocator’s clicks on different materials (a blanket, fake foliage, and a whiteboard) and looked at the responses these sounds produced in the brains (using functional magnetic resonance imaging) of sighted people, of blind non-echolocators, and of blind echolocators.

The results show that material-related auditory signals activate a region of the brain called the parahippocampal cortex (PHC) in blind expert echolocators, but not in sighted people or blind non-echolocators. PHC activation is associated with scene perception in sighted individuals. Just as in sighted individuals using vision, the brain regions that play a critical role in processing the structure and geometry of objects are distinct from the brain regions that process the cues that signal the material properties of objects in blind echolocators.

“Our experiments show that echolocation is not just a tool to help visually-impaired individuals navigate their environment, but can act as an effective sensory replacement for vision, allowing them to recognize the shape, size, and material properties of objects,” adds Goodale.

Interestingly, other experiments Goddale conducted indicated that blind expert echolocators are also subject to illusions, for example the size-weight illusion in which the perception of mass is influenced by the size of an object. If two objects of equal weight are presented to both a sighted and a blind echolocator, both will find the smaller object feels heavier when they lift it using a string attached to a pulley. This illusion, which Goodale says is based on the lifter’s cognitive expectations – and the fact that it is also present in blind echolocators but not in blind non-echolocators – “indicates that echolocation is an effective form of sensory substitution for vision.”