You are here: Home › Humans › News › Brain connectivity may have sparked Einstein’s brilliance
By Will Parker on October 4, 2013 in Humans, News 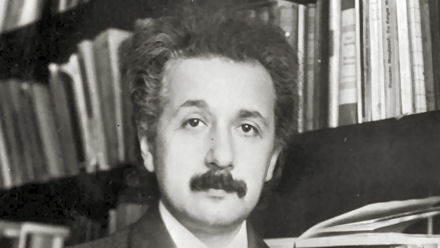 A new analysis technique that compared Albert Einstein’s brain to others of the period shows the left and right cerebral hemispheres of the famous scientist’s brain were unusually well connected to each other. This connectivity may have contributed to his brilliance, according to Florida State University evolutionary anthropologist Dean Falk.

Falk was part of a research team that investigated Einstein’s corpus callosum, the large bundle of fibers that connects the two cerebral hemispheres and facilitates interhemispheric communication in the brain. The findings appear, appropriately, in the journal Brain.

A key part of the research was the use of a new technique, developed by Weiwei Men of East China Normal University, that measures and color-codes the varying thicknesses of subdivisions of the corpus callosum along its length, where nerves cross from one side of the brain to the other. These thicknesses indicate the number of nerves that cross and therefore how “connected” the two sides of the brain are in particular regions, which facilitate different functions depending on where the fibers cross along the length.

Men’s technique allowed the comparison of Einstein’s brain connectivity with those of other samples – one of 15 elderly men and one of 52 men Einstein’s age (26) in 1905.

During his so-called “miracle year” at 26 years old, Einstein published four articles that contributed enormously to the foundation of modern physics and changed the world’s views about space, time, mass and energy.

Funko Einstein - Back to the Future