You are here: Home › News › Physics › New paper shows how spacetime is built from quantum entanglement
By Will Parker on May 28, 2015 in News, Physics 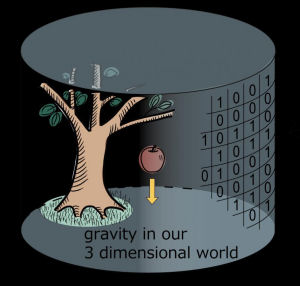 A new paper to be published in Physical Review Letters has made a significant step toward unifying general relativity and quantum mechanics by explaining how spacetime emerges from quantum entanglement.

The international collaboration of physicists and mathematicians who authored the paper hope it will prove to be a first step toward the long sought Theory of Everything that unifies general relativity and quantum mechanics.

The paper focuses on the holographic principle, regarded by many theorists as an essential feature of a successful Theory of Everything. The holographic principle states that gravity in a three-dimensional volume can be described by quantum mechanics on a two-dimensional surface surrounding the volume. Specifically, the three dimensions of the volume should emerge from the two dimensions of the surface.

However, understanding the precise mechanics for the emergence of the three-dimensional volume from the two-dimensional surface has been elusive. Authors of the new paper Hirosi Ooguri, from the University of Tokyo, and Caltech mathematician Matilde Marcolli, argue that quantum entanglement is the key to solving this question.

Using a quantum theory (that does not include gravity), they showed how to compute energy density, which is a source of gravitational interactions in three dimensions, using quantum entanglement data on the surface. This is analogous to diagnosing conditions inside of your body by looking at X-ray images on two-dimensional sheets.

This allowed them to interpret universal properties of quantum entanglement as conditions on the energy density that should be satisfied by any consistent quantum theory of gravity, without actually explicitly including gravity in the theory. Ooguri and Marcolli’s work shows that this quantum entanglement generates the extra dimensions of the gravitational theory.

“It was known that quantum entanglement is related to deep issues in the unification of general relativity and quantum mechanics, such as the black hole information paradox and the firewall paradox,” explained Ooguri. “Our paper sheds new light on the relation between quantum entanglement and the microscopic structure of spacetime by explicit calculations. The interface between quantum gravity and information science is becoming increasingly important for both fields. I myself am collaborating with information scientists to pursue this line of research further.”

Blind human echolocators can recognize the shape, size, and material properties of objects, according to new study
Researchers find link between cannabis use and fewer parasites