You are here: Home › News › Physics › Spring-assisted exoskeleton beats evolution
By Will Parker on April 1, 2015 in News, Physics 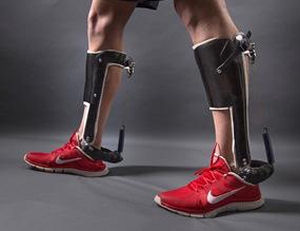 It’s taken millions of years for evolution to perfect how we walk, but research published in the journal Nature shows that humans can get better efficiency – around 7 percent – using an unpowered exoskeleton to modify the structure of their ankles.

To gain an advantage over nature, North Carolina State University and Carnegie Mellon University researchers tested the efficacy of a lightweight lower-leg device that uses a spring and clutch system working in tandem with calf muscles and the Achilles’ tendon while people walk.

In developing the device, the research team faced a challenge. When you place heavy objects on the legs, there’s an initial penalty that increases your energy costs. Previous efforts had not been able to overcome that initial penalty. For that reason, it was critical to the researchers to keep the device light. Over several years and many iterative designs, the team developed a carbon-fiber design that is ultra-light, yet rugged and functional. The device weighs about as much as a normal shoe – around 500 grams – and is not motorized, so it requires no energy from batteries or other external sources. 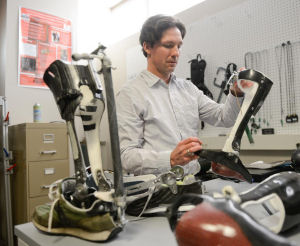 “The unpowered exoskeleton is like a catapult. It has a spring that mimics the action of your Achilles’ tendon, and works in parallel with your calf muscles to reduce the load placed upon them,” said Dr. Gregory Sawicki, a North Carolina biomedical engineer who co-authored the paper. “The clutch is essential to engage the spring only while the foot is on the ground, allowing it to store and then release elastic energy. Later it automatically disengages to allow free motion while the foot is in the air.”

The study participants – nine able-bodied adults – strapped the exoskeleton devices on both legs and walked at a normal speed on a treadmill after completing some practice training. The same subjects also walked without exoskeletons for a baseline comparison. Later analysis revealed the 7 percent boost to metabolic efficiency.

“A 7 percent reduction in energy cost is like taking off a 10-pound backpack, which is significant,” Sawicki said. “Though it’s surprising that we were able to achieve this advantage over a system strongly shaped by evolution, this study shows that there’s still a lot to learn about human biomechanics and a seemingly simple behavior like walking.”

The work may benefit both able-bodied people who are frequently on their feet – think of the military infantry or athletic baby-boomers, for example – as well as those who have been victims of stroke or other gait impairments. “Someday soon we may have simple, lightweight and relatively inexpensive exoskeletons to help us get around, especially if we’ve been slowed down by injury or aging,” said paper co-author Dr. Steven Collins, a mechanical engineer and roboticist from Carnegie Mellon University.