You are here: Home › News › Physics › Physicists map conductivity change in transition from 3 to 2 dimensions
By Will Parker on July 6, 2015 in News, Physics 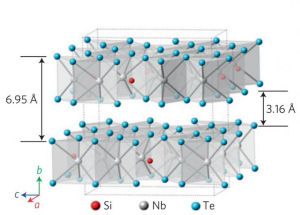 Scientists from the Moscow Institute Of Physics And Technology and Tulane University (New Orleans) have for the first time described the behavior of electrons in a previously unstudied analogue of graphene, two-dimensional niobium telluride, and, in the process, uncovered the nature of two-dimensionality effects on conducting properties. Their findings will help pave the way for the creation of novel flat and flexible electronic devices.

One such material is Nb3SiTe6, a compound of niobium telluride. The crystals resemble sandwiches with a thickness of three atoms (around 4 angstroms): a layer of tellurium, a layer of niobium mixed with silicon atoms and then another layer of tellurium. This substance belongs to a class of materials known as dichalcogenides, which may offer two-dimensional semiconducting properties.

In the new research, the scientists synthesized Nb3SiTe6 crystals in a laboratory at Tulane University. They then separated them into two-dimensional layers, taking samples for further analysis by transmission electron microscopy, X-ray crystal analysis and other methods. The goal was to investigate electron-phonon interaction changes.

Phonons are quasi-particles, perhaps better described as quanta of crystal lattice oscillations. Physicists introduced the concept of phonons because it helped simplify the description of processes in crystals, and tracking of electron-phonon interaction is fundamentally important for description of the different conducting properties in matter.

“We developed a theory that predicts that electron-phonon interaction is suppressed due to dimensional effects in two-dimensional material. In other words, these materials obstruct the flow of electrons to a lesser extent,” says Pavel Sorokin, a co-author of the study.

American colleagues confirmed this prediction in related experiments. “They conducted measurements where the same effect was observed. Our calculations allowed the ruling out of other explanations; we managed to prove that changes in electron-phonon interaction occur specifically because of the two-dimensionality of the membrane,” Sorokin adds.