You are here: Home › News › Physics › Image captures light as both a particle and a wave
By Will Parker on March 2, 2015 in News, Physics 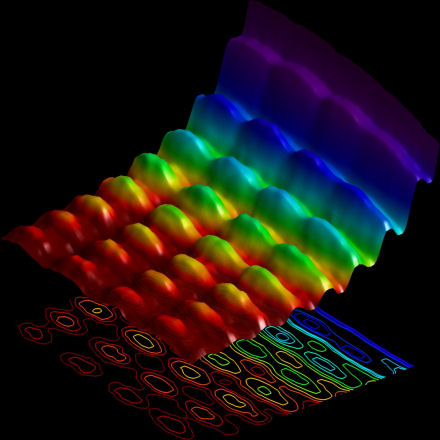 Quantum mechanics tells us that light can behave simultaneously as a particle or a wave, but it’s only possible to see one of these attributes at any given moment. Even though a variety of experiments have successfully observed both behaviors of light, they have never been able to observe both at the same time. Now, Europeans scientists have been able to take the first ever snapshot of light behaving both as a wave and as a particle, demonstrating that imaging quantum phenomena at the nanometer scale is possible. The work, by EPFL scientists, has been published in Nature Communications.

This is where the experiment’s trick comes in: The scientists shot a stream of electrons close to the nanowire, using them to image the standing wave of light. As the electrons interacted with the confined light on the nanowire, they either sped up or slowed down. Using an ultrafast microscope to image the position where this change in speed occurred, Carbone’s team could now visualize the standing wave, which acts as a fingerprint of the wave-nature of light.

While this phenomenon shows the wave-like nature of light, it simultaneously demonstrated its particle aspect as well. As the electrons pass close to the standing wave of light, they “hit” the light’s particles, the photons. This affects their speed, making them move faster or slower. This change in speed appears as an exchange of energy “packets” (quanta) between electrons and photons. The occurrence of these energy packets shows that the light on the nanowire behaves as a particle.

“This experiment demonstrates that, for the first time ever, we can film quantum mechanics – and its paradoxical nature – directly,” says Carbone. “Being able to image and control quantum phenomena at the nanometer scale like this opens up a new route towards quantum computing.”

Related:
Discuss this article in our forum
Researchers go beyond quantum limit
Physicists map quantum to classical collapse
Mysterious “action at a distance” between liquids may be commonplace