You are here: Home › News › Oscar Pistorius’ artificial limbs provide “major advantage for sprinting”
By Will Parker on November 18, 2009 in News 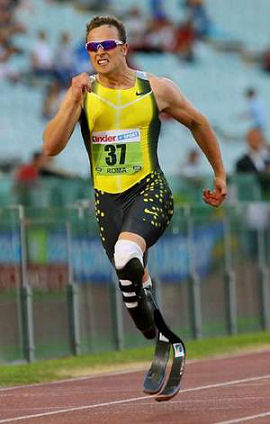 Human performance experts say that the artificial lower limbs of double-amputee Oscar Pistorius give him a major advantage over his competition – chopping at least 10 seconds off the 400-meter sprint. The findings, released publicly today, were compiled by of Peter Weyand of Southern Methodist University in Dallas and Matthew Bundle of the University of Wyoming and published in the Journal of Applied Physiology.

The test results were acquired as part of the legal appeal process undertaken after the governing body of Track and Field (International Association of Athletics Federations (IAAF)) banned Pistorius from able-bodied track competitions, including the Olympics.

In banning Pistorius, the IAAF had concluded on the basis of other data that Pistorius’ J-shaped, artificial lower limbs (known as “Cheetahs”) gave him a competitive advantage over able-bodied competitors. The ban, however, was subsequently overturned on appeal to the Court of Arbitration for Sport (CAS) in Lausanne, Switzerland. The case has been considered a landmark in the eligibility of disabled athletes and the regulation of prosthetic technology in sport.

“Pistorius’ sprinting mechanics are anomalous, advantageous and directly attributable to how much lighter and springier his artificial limbs are. The blades enhance sprint running speeds by 15-30 percent,” said Weyand. Below the knee, Pistorius’ limbs weigh less than half as much as the limbs of an able-bodied male sprinter.

Co-researcher Bundle added that most of the 15-30 percent speed advantage is explained by how quickly the lightweight blades allow him to reposition his limbs: “Even in comparison to those male sprinters with the most extreme adaptations for speed in recorded human history, Oscar Pistorius has limb repositioning times that are literally off the charts. Usain Bolt is considered somewhat freakish because he outruns his opponents by 2-4 percent. At top speed, Oscar Pistorius repositions his limbs 15 percent more rapidly than six of the most recent world record holders in the 100 meter dash, including Usain Bolt.”

Specifically, the researchers established that:

“We are pleased to finally be able to go public with conclusions that the publishing process has required us to keep confidential until now. We recognized that the blades provide a major advantage as soon as we analyzed the critical data more than a year and a half ago,” concluded the researchers.