You are here: Home › News › Academics Mull Flow-On Effects Of Climate Change
By Will Parker on November 27, 2007 in News 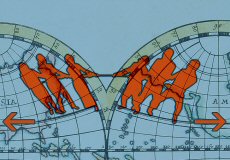 Climate change may ultimately lead to wars and population decline, says a new study in theProceedings of the National Academy of Sciences. The new work is based on data from a period called the Little Ice Age, which occurred around 400 years ago.

“Even though temperatures are increasing now, the same resulting conflicts may occur since we still greatly depend on the land as our food source,” said study co-author Peter Brecke, from the Georgia Institute of Technology.

The new study expands on previous work by co-researcher David Zhang, of the University of Hong Kong, which examined the effects of the Little Ice Age in Eastern China.

Brecke and Zhang perceived a possible connection between temperature change and wars because changes in climate affect water supplies, growing seasons and land fertility, prompting food shortages. These shortages could lead to conflict – local uprisings, government destabilization and invasions from neighboring regions – and population decline due to war and starvation.

To assess whether changes in temperature affected the number of wars, the researchers examined the time period between 1400 and 1900. This period recorded the lowest average global temperatures around 1450, 1650 and 1820, each separated by slight warming intervals. The researchers collected war data from multiple sources and used climate change records that paleoclimatologists reconstructed by consulting historical documents and examining indicators of temperature change like tree rings, as well as oxygen isotopes in ice cores and coral skeletons.

The study also showed population declines following each high war peak. In China, the population plummeted 43 percent between 1620 and 1650. Then, a dramatic increase in population occurred from 1650 until a cooling period beginning in 1800 caused a worldwide demographic shock.

The researchers also showed that when grain prices reached a certain level, wars erupted. The ecological stress on agricultural production triggered by climate change did in fact induce population shrinkages, according to Brecke.

“The warmer temperatures are probably good for a while, but beyond some level plants will be stressed,” explained Brecke. “With more droughts and a rapidly growing population, it is going to get harder and harder to provide food for everyone and thus we should not be surprised to see more instances of starvation and probably more cases of hungry people clashing over scarce food and water.”

Call For Review Of “Safe” Lead Levels
Biological Cause For Body Dysmorphic Disorder?