You are here: Home › News › Researchers Demo Neural Implant That “Learns”
By Will Parker on June 25, 2008 in News 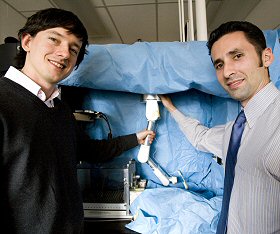 Neural implants, or brain-machine interfaces, are touted as the key to helping paralyzed patients and amputees control prosthetic limbs with just their thoughts. But until now these interfaces were crude and inflexible, reacting only to specific neuronal signals in a preordained manner. Now, however, University of Florida (UF) researchers have taken the concept a step further, devising a way for computerized devices to not only translate brain signals into robotic movement, but also to evolve with the brain as it learns.

The UF medicine and engineering researchers who developed the new implant say that until now, brain-machine interfaces have been designed as one-way conversations between the brain and a computer, with the brain doing all the talking and the computer following commands. The new system differs in that it allows the device to adapt to a person’s behavior over time.

“In the grand scheme of brain-machine interfaces, this is a complete paradigm change,” Justin C. Sanchez, the study’s senior author, told IEEE Transactions on Biomedical Engineering. “This idea opens up all kinds of possibilities for how we interact with devices. It’s not just about giving instructions but about those devices assisting us in a common goal. You know the goal, the computer knows the goal and you work together to solve the task. We learn throughout our lives and come into different scenarios, so you need to develop a paradigm that allows interaction and growth.”

To create a brain-machine interface that could achieve this, Sanchez and his colleagues developed a system based on setting goals and giving rewards. The new system was then tested in the laboratory using rats fitted with tiny electrodes in their brains to capture signals for the computer to unravel. Three rats were then taught to move a robotic arm toward a target with just their thoughts and each time they succeeded they were rewarded with a drop of water.

The computer’s goal, on the other hand, was to earn as many “points” as possible, Sanchez explained. The closer a rat moved the arm to the target, the more points the computer received, giving it incentive to determine which brain signals lead to the most rewards, making the process more efficient for the rat.

The researchers conducted several tests with the rats, requiring them to hit targets that were farther and farther away. Despite this increasing difficulty, the rats completed the tasks more efficiently over time and did so at a significantly higher rate than if they had just aimed correctly by chance.

“We think this dialogue with a goal is how we can make these systems evolve over time,” Sanchez said. “We want these devices to grow with the user. We want users to be able to experience new scenarios and be able to control the device.”