You are here: Home › Health › Diet › News › Significant testosterone deficiency found in obese boys
By Will Parker on October 17, 2012 in Diet, News 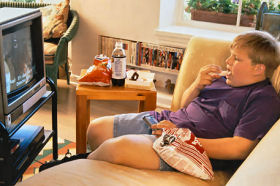 For the first time, medicos have measured testosterone levels in teens of different weights and found that obese males aged between 14 and 20 have up to 50 percent less testosterone, significantly increasing their potential to be impotent and infertile as adults. The study was conducted by researchers from the University at Buffalo and the findings appear in the journalClinical Endocrinology.

While the results need to be confirmed with a larger number of subjects, research leader Paresh Dandona said the implications of the findings are “horrendous,” and have “massive epidemiological implications.”

“These findings demonstrate that the effect of obesity is powerful, even in the young, and that lifestyle and nutritional intake starting in childhood have major repercussions throughout all stages of life,” he said.