You are here: Home › Health › Diet › News › Hunter-gatherer study contradicts obesity theory
By Will Parker on July 26, 2012 in Diet, News 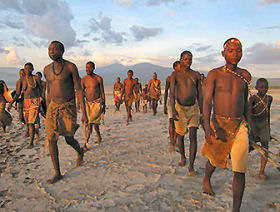 New findings published in the journal PLoS ONEsuggest that diet – rather than lack of exercise – may be the main driver for expanding waistlines in the Western world. The research team behind the study, led by Herman Pontzer of Hunter College, measured daily energy expenditure (calories/day) among the Hadza, a population of traditional hunter-gatherers living on the open savannah of Tanzania.

Surprisingly, despite spending their days trekking long distances to forage for wild plants and game, the Hadza burned no more calories each day than adults in the U.S. and Europe. The team ran several analyses accounting for the effects of body weight, body fat percentage, age, and gender. In all analyses, daily energy expenditure among the Hadza hunter-gatherers was indistinguishable from that of Westerners.

The findings contradict the long-held assumption that our hunter-gatherer ancestors expended more energy than modern humans, and challenge the view that obesity in Western populations results from decreased energy expenditure. Instead, the similarity in daily energy expenditure across a broad range of lifestyles suggests that habitual metabolic rates are relatively constant among human populations.

This, say the researchers, supports the view that the current rise in obesity is due to increased food consumption, not decreased energy expenditure. “These results highlight the complexity of energy expenditure. It’s not simply a function of physical activity,” says Pontzer. “Our metabolic rates may be more a reflection of our shared evolutionary past than our diverse modern lifestyles.”

The old sow in Distress,or the country parsons return from tithing,Clegy,Obesity