You are here: Home › Health › Diet › News › Blood-brain barrier in obese people hotwired for fatty foods
By Will Parker on October 2, 2012 in Diet, News 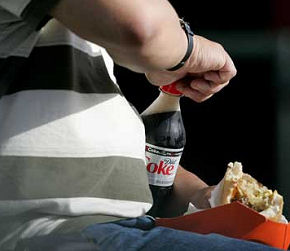 Scientists from American University say diets high in saturated fat and refined sugar appear to cause changes to the blood-brain barrier of obese people that in turn may fuel overconsumption of those same foods and make weight loss more challenging. “It is a vicious cycle that may explain why obesity is so difficult to overcome,” said Terry Davidson, director of the university’s Center for Behavioral Neuroscience.

For the study, the results of which were published in the journal Physiology & Behavior, Davidson and his team trained rats given restricted access to low-fat “lab chow” on two problems – one that tested the rats’ hippocampus-dependent learning and memory abilities and one that did not. The hippocampus is the part of the brain responsible for memory and learning.

Once the training phase was completed, the rats were split into two groups: one group had unlimited access to the low-fat lab chow, while the other had unlimited access to high-energy (high-fat/calorie) food. The high-energy food was high in saturated fat (animal fats, such as those found in cheese or meat or certain plant-based fats, such as cottonseed oil and coconut oil) – considered to be the unhealthiest dietary fat as research has linked it to cardiovascular disease and certain types of cancer.

When both groups of rats were presented with the problems again, the rats that became obese from the high-energy diet performed significantly more poorly than the non-obese rats did on the problem designed to test learning and memory. They tested the same as the non-obese rats on the other problem.

Interestingly, the non-obese rats group included rats from both the low-fat lab chow group and the high-energy diet group. But this isn’t a matter of some rats having a super-high metabolism that allowed them eat to large amounts of the high-energy food and remain a reasonable weight. “The rats without blood-brain barrier and memory impairment also ate less of the high-energy diet than did our impaired rats,” Davidson explained. “Some rats and some people have a lower preference for high-energy diets. Our results suggest that whatever allows them to eat less and keep the pounds off also helps to keep their brains cognitively healthy.”

If Davidson’s findings apply to people, it could be that a diet high in saturated fat and refined sugar impacts the hippocampus’s ability to suppress unwanted thoughts – such as those about high-calorie foods, making it more likely that an obese person will consume those foods and not be able to stop at what would be considered a reasonable serving.

“What I think is happening is a vicious cycle of obesity and cognitive decline,” Davidson said. “The idea is, you eat the high fat/high calorie diet and it causes you to overeat because this inhibitory system is progressively getting fouled up. And unfortunately, this inhibitory system is also for remembering things and suppressing other kinds of thought interference.”

Davidson’s findings may be linked to other studies that found a link between human obesity in middle age and an increased likelihood of developing Alzheimer’s disease and other cognitive dementias later in life. “We are trying to figure out that link,” Davidson said. “We have compelling evidence that overconsumption of a high fat diet damages or alters the blood-brain barrier. Now we are interested in the fact that substances that are not supposed to get to the brain are getting to it because of this breakdown. You start throwing things into the brain that don’t belong there, and it makes sense that brain function would be affected.”