You are here: Home › News › Gamma ray burst was brightest ever
By Will Parker on September 11, 2008 in News 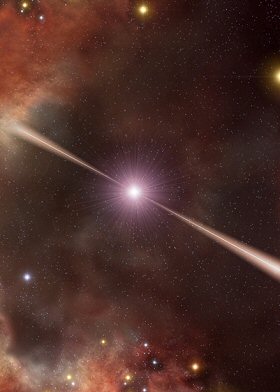 Astronomers from around the world have combined data from ground and space based telescopes to paint a detailed portrait of a stellar explosion that was briefly brighter than the galaxy that contained it, visible to the naked eye despite originating halfway across the universe.

The gamma-ray burst, catalogued as GRB 080319B, was the result of a massive star’s explosion 7.5 billion years ago that sent a pencil-beam of intense light on a direct collision course for Earth. It is the only known gamma-ray burst to have had a visible component bright enough to see with the naked eye. “This was the brightest optical and infrared event that mankind has ever recorded,” said Joshua Bloom, an assistant professor of astronomy at the University of California, Berkeley, and first author of an analysis of the event in The Astrophysical Journal.

The gamma-ray burst was first detected by NASA’s Swift satellite on March 19, after which terrestrial and space-based telescopes slewed into position to observe the rapidly fading light. Situated within the constellation Bootes, its flash eventually was pinpointed at a distance of about 7.5 billion light years.

Bloom’s group, using a robotic telescope in Arizona, began observing the intense infrared light just 54 seconds after the event began. The telescope was operating autonomously on a direct link from the Swift satellite. Bloom’s graduate students Daniel Perley and Adam A. Miller analyzed the data. “This was the most powerful event ever seen in human existence,” gushed Bloom’s coauthor Alex Filippenko, UC Berkeley professor of astronomy.

Filippenko calculated that if the supernova were located about 6,000 light years from Earth, the gamma-ray burst would have appeared as bright as the sun. Perley noted, too, that the burst at its peak was about 200 million times brighter than the entire galaxy in which it occurred.

Bloom hoped that the rapid response to GRB 080319B by astronomers could be repeated in the future, thus opening up the possibility of increasing our understanding of these colossal explosions. “When more of these events are detected, we will open up the possibility of studying the infant universe with this new tool,” he said.

Climatologists get to grips with aerosols
Invariance And Computer Vision