You are here: Home › News › Astronomers Mull Mystery Gamma Ray Burst
By Will Parker on December 21, 2006 in News 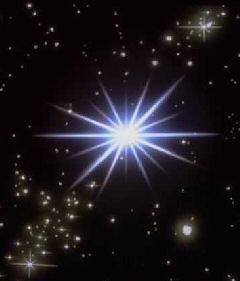 Four articles in the journal Nature discuss a mysterious new type of gamma ray burst that doesn’t fit with our current model of supernovae. Termed a “hybrid gamma-ray burst”, the phenomenon was first observed with NASA’s Swift satellite on 14 June 2006, and has since been studied with the Hubble Space Telescope and large ground-based observatories.

“Gamma-ray bursts are the most powerful explosions in the Universe, yet they are random and fleeting, never appearing in the same place twice. The only way to study them in detail is to observe them as quickly as possible with the most powerful telescopes we have,” explains Penn State’s Derek Fox, author of one of the papers. “This burst – unlike all other long gamma-ray bursts we have seen – was not accompanied by a supernova, for reasons we do not yet fully understand.”

Gamma-ray bursts usually signal the birth of a new black hole, and astronomers believe this to be the case with the hybrid burst. It is unclear, however, what kind of object or objects exploded or merged to create the black hole or, perhaps, something even more bizarre. The hybrid burst exhibits properties of the two known classes of gamma-ray bursts, characterized as “long” and “short,” yet has other features that cannot be explained.

“We have lots of data on this [hybrid] burst and have dedicated lots of observation time to it, and we just can’t figure out what exploded,” said Neil Gehrels of NASA Goddard Space Flight Center. “All the data seem to point to a new but perhaps not-so-uncommon kind of cosmic explosion.” The hybrid burst, called GRB 060614, was 1.6 billion light years away in the constellation Indus.

Despite its 102-second-long emission, the hybrid burst lacked the hallmark of a supernova, or star explosion, commonly seen shortly after long bursts. Also, the burst’s host galaxy has a low star-formation rate with few stars massive enough to produce long gamma-ray bursts and supernovae. “This burst was close enough to detect a supernova if it existed,” said Avishay Gal-Yam of Caltech, lead author on another Nature report, “but even Hubble didn’t see anything.” “We have been tracking these bursts regularly with Hubble, and only a short burst would be expected to disappear like this. It was a huge surprise when we looked at these data and found nothing there,” added Fox.

Certain properties of the hybrid burst suggest that it behaved more like a short burst from a merger of stars than a long burst from a single collapsing star. But no previous theoretical model of mergers can support a sustained release of gamma-ray energy for 102 seconds.

Speculating on the nature of the hybrid burst, astronomers writing in the Astrophysical Journal, suggest that a “scaled down” version looks a lot like a “normal” short burst. “It may be that many – or perhaps all – bursts that normally would have been classified as short, have a longer-lasting and dimmer emission of lower-energy gamma-rays, which becomes more prominent when they are as luminous as this very bright burst,” explained astronomer Peter Meszaros. “If so, the new puzzle is to understand what gives rise to these dimmer and longer-lasting emissions – and this puzzle is in virtually uncharted territory.”

While scientists remain undecided on whether this was a long short burst from a merger or a long burst from a star explosion that, for some unknown reason, did not produce a supernova, most conclude that some new process must be at play: either the model of mergers creating second-long bursts needs a major overhaul, or the progenitor star from an explosion is intrinsically different from the kind that makes supernovae.