You are here: Home › News › Anomalous supernova puzzles astronomers
By Will Parker on May 20, 2010 in News 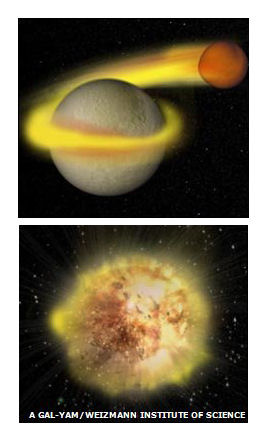 Supernova 2005E, discovered five years ago by the University of California, Berkeley’s Katzman Automatic Imaging Telescope (KAIT), is a calcium-rich supernova that defies categorization, leading astronomers to speculate that it may hint at new and unusual physics.

“With the sheer numbers of supernovae we’re detecting, we’re discovering weird ones that may represent different physical mechanisms compared with the two well-known types, or may just be variations on the standard themes,” said KAIT director Alex Filippenko. “But SN 2005E was a different kind of ‘bang.’ It and the other calcium-rich supernovae may be a true suborder, not just one of a kind.”

Filippenko is coauthor of a paper in the journalNature describing SN 2005E and arguing that it is distinct from the two main classes of supernovae: the Type Ia supernovae, thought to be old, white dwarf stars that accrete matter from a companion until they undergo a thermonuclear explosion that blows them apart entirely; and Type Ib/c or Type II supernovae, thought to be hot, massive and short-lived stars that explode and leave behind black holes.

The team of astronomers present evidence that the original star was a low-mass white dwarf stealing helium from a binary companion until the temperature and pressure ignited a thermonuclear explosion that “blew off” at least the outer layers of the star, and perhaps annihilated the entire star.

However, a team of researchers from Hiroshima University in Japan argue in the same issue of Nature that SN 2005E’s original star was massive – between 8 and 12 solar masses – and that it underwent a core collapse similar to a Type II supernova.

“It’s a confusing, muddy situation now,” lamented Filippenko. “But we hope that, by finding more examples of this subclass and of other unusual supernovae and observing them in greater detail, we will find new variations on the theme and get a better understanding of the physics that’s actually going on.”

Filippenko and UC Berkeley research astronomer Weidong Li first reported an unusual calcium-rich supernova in 2003, and since then, KAIT has discovered several more, including SN 2005E. Because these supernovae, like Type Ib, show evidence for helium in their spectra shortly after they explode, and because in the later stages they show strong calcium emission lines, the UC Berkeley astronomers were the first to refer to them as “calcium-rich Type Ib supernovae.”

“We know that SN 2005E came from the explosion of an old, low-mass star because of its specific location in the outskirts of a galaxy devoid of recent star formation,” said Filippenko. “And the presence of so much calcium in the ejected gases tells us that helium must have exploded in a nuclear runaway.”

The researchers note that, if these calcium-rich superonovae are the first examples of a common, new type of supernova, they could explain two puzzling observations: the abundance of calcium in galaxies and in life on Earth, and the concentration of positrons – the anti-matter counterpart of the electron – in the center of galaxies. The latter could be the result of the decay of radioactive titanium-44, produced abundantly in this type of supernova, to scandium-44 and a positron, prior to scandium’s decay to calcium-44. The most popular explanation for this positron presence is the decay of putative dark matter at the core of galaxies. “Dark matter may or may not exist,” says co-researcher Avishay Gal-Yam, “but these positrons are perhaps just as easily accounted for by the third type of supernova.”

The team hope that KAIT and other telescopes scanning distant galaxies every night in search of new supernovae will turn up more examples of calcium-rich or even stranger supernovae. “The research field of supernovae is exploding right now,” punned Filippenko. “Many supernovae with peculiar new properties have been found, pointing to a greater richness in the physical mechanisms by which nature chooses to explode stars.”