You are here: Home › News › Secrets Of Gamma Ray Bursts Revealed
By Will Parker on October 7, 2005 in News 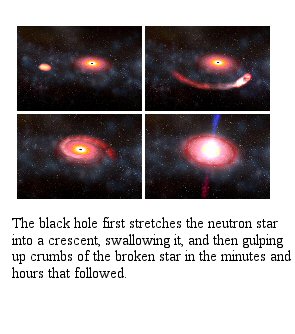 Gamma ray bursts (GRBs) have baffled scientists for more than three decades since their discovery in 1973. They can last anywhere from fractions of a second to minutes, and they can come from any direction in the sky, shining billions of times brighter than their host galaxies. The main problem for scientists trying to observe GRBs is that they happen far too quickly for telescopes to be trained on them. Try finding the location of a camera flash somewhere in a vast sports stadium and you’ll have a sense of the challenge facing gamma-ray burst hunters. “Gamma-ray bursts in general are notoriously difficult to study, but the shortest ones have been next to impossible to pin down,” lamented Dr. Neil Gehrels of NASA.

Their conclusions are based on observations of four short gamma-ray bursts over the last 5 months. One burst from July provides the “smoking gun” evidence to support the collision theory. Another burst goes a step further by providing tantalizing, first-time evidence of a black hole eating a neutron star – first stretching the neutron star into a crescent, swallowing it, and then gulping up crumbs of the broken star in the minutes and hours that followed.

“Powerful telescopes detected no supernova as the gamma-ray burst faded, arguing against the explosion of a massive star,” said researcher Dr. George Ricker of MIT. “The July 9 burst was like the dog that didn’t bark.” Ricker added that the July 9 burst and an earlier burst in May are located in the outskirts of their host galaxies, where old merging binaries are expected to be. Short gamma-ray bursts are not expected in young, star-forming galaxies. It takes billions of years for two massive stars, coupled in a binary system, to first evolve to the black hole or neutron star phase and then to merge. The transition of a star to a black hole or neutron star involves an explosion (supernova) that can kick the binary system far from its origin and out towards the edge of its host galaxy.

The July 9 burst, and a later one on July 24, showed unique signals that point to a black hole – neutron star merger. Scientists saw spikes of X-ray light after the initial gamma-ray burst. The quick gamma-ray portion is likely a signal of the black hole swallowing most of the neutron star. The X-ray signals, in the minutes to hours that followed, could be “crumbs” of neutron star material falling into the black hole.

The researchers believe their work could help in the hunt for gravitational waves – ripples in space-time predicted by Einstein but never detected directly. It is thought that merging neutron stars are powerful sources of these gravitational waves. “This is good news for LIGO [Laser Interferometer Gravitational-Wave Observatory],” said Dr. Albert Lazzarini, of the LIGO Laboratory at Caltech. “The connection between short bursts and mergers firms up projected rates for LIGO, and they appear to be at the high end of previous estimates. Also, observations provide tantalizing hints of black hole – neutron star mergers, which have not been detected before. During LIGO’s upcoming year-long observation we may detect gravitational waves from such an event.”