You are here: Home › News › Physics › “Cloaked” buildings could withstand earthquakes, say UK scientists
By Will Parker on February 15, 2012 in News, Physics 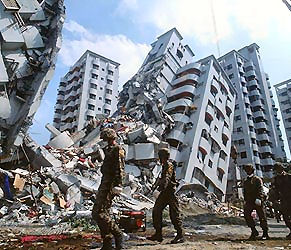 While much media attention has been paid to the development of an invisibility “cloak” that works with electromagnetic waves such as light, mathematicians from the University of Manchester have been looking at cloaking other wave-types, specifically, the damaging elastic waves generated by earthquakes.

While their work, reported in Proceedings of the Royal Society A, is only theoretical at present, the scientists claim that cloaking devices could eventually help to protect buildings and structures from vibrations and natural disasters.

Research into cloaking light waves began about six years ago, but very little work has been done on waves in solid bodies such as those produced by earthquakes. “In the last few years we have started to consider other wave-types, most importantly perhaps sound and elastic waves. The real problem with the latter is that it is normally impossible to use naturally available materials as cloaks,” explained lead researcher Dr William Parnell.

Now, however, Parnell says his team has demonstrated that it is possible to control the direction and speed of elastic waves by cloaking components of structures with pressurized rubber. “Powerful waves such as those produced by an earthquake would not ‘see’ the building,” he claims. “We showed theoretically that pre-stressing a naturally available material – rubber – leads to a cloaking effect from a specific type of elastic wave. If the theory can be scaled up to larger objects then it could be used to create cloaks to protect buildings and structures. Our team is now working hard on more general theories and to understand how this theory can be realized in practice.”

Related:
Discuss this article in our forum
Earthquakes and animal behavior: it’s in the water
Tropical storms may be triggering earthquakes
Quake detection gets cheap and cheerful