You are here: Home › News › Physics › Naturally quantum critical material identified
By Will Parker on January 21, 2011 in News, Physics 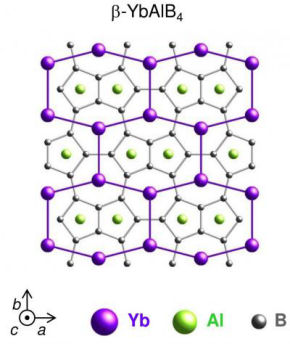 In what researchers are calling a “dream system,” an exotic new superconductor based on the element ytterbium appears to exist in aquantum critical state naturally; a highly desirable property that could have profound implications for the manufacture of superconductors and electronics.

This point, which physicists call “quantum critical,” often defines whether and how a material can become superconducting. Scientists have long been able to “tune” materials toward quantum criticality by altering the materials’ properties. This is done by exposing them to high magnetic fields and pressures, or by adding certain atomic impurities to the materials. The material studied by the Tokyo and Rutgers researchers, however, appears to be the first to exhibit quantum criticality in its natural state, without tuning.

“This is a completely unexpected result,” said Rutgers’ Piers Coleman. “It could be the first example of what physicists describe as a ‘strange’ metallic phase of matter, manifesting itself intrinsically, without any tuning of the material’s properties.”

The material initially synthesized and studied by the Japanese experimental physicists is an exotic crystal made up of the elements ytterbium, boron, and aluminum. It has the chemical formula YbAlB4 but the physicists gave it the nickname “YBAL.” Superconductivity had earlier been observed in YBAL, in a particular crystalline form called the “beta” structure. The Tokyo physicists suspected they could find a quantum critical point in the material; however, its superconducting behavior that kicks in slightly above absolute zero masked their ability to pinpoint it.

Coleman and researcher Andriy Nevidomskyy examined the data from the Tokyo experiments at a wide range of temperatures and magnetic field strengths. All the data, they found, collapsed onto a curve that pointed to the unobservable quantum critical point (QCP) hidden by the superconducting phase. The QCP was within hair’s breadth of zero magnetic field, with no externally applied tuning of pressure or other parameters.

“It’s kind of a dream system,” said Coleman. “We’ve found a material that is intrinsically quantum critical with very simple behavior. It’s puzzling, because there’s nothing simple about the material’s structure. We’re not sure why this happens.”

The discovery that most intrigues the physicists is that beta-YBAL could be revealing an exotic new phase of matter known as the “critical strange metal” phase. At the quantum critical point, the material can shift between conventional electrical behavior, which physicists call a Fermi liquid, to superconducting behavior, and to a condition that resembles neither, called “strange metal” behavior. This behavior has been observed in superconducting materials, but it’s not known whether it occurs only in the vicinity of a QCP or whether it can exist over an extended range of physical conditions, which would essentially make it a phase of matter. “We are very excited,” said Satoru Nakatsuji, leader of the Tokyo research team. “If true, this would be an amazing discovery, opening new horizons in our understanding of quantum criticality.”