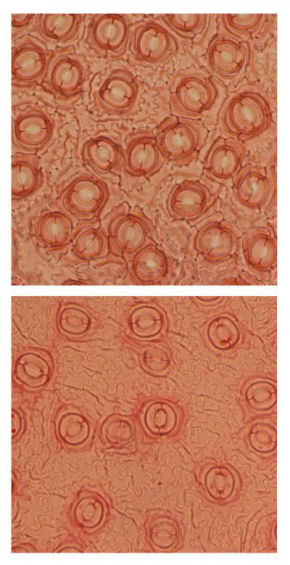 Botanists from Indiana University (IU) and Utrecht University (Netherlands) have discovered that rising carbon dioxide levels over the last 150 years have reduced the density of the pores (known as stomata) that plants use to breathe by 34 percent, dramatically lowering the amount of water vapor the plants release to the atmosphere. Writing about their findings in the Proceedings of the National Academy of Science, the researchers hypothesize that continually increasing CO2 levels could reduce plant transpiration (water exchange) to the point where rainfall patterns are significantly altered.

For their research, the scientists gathered data from a diversity of plant species in Florida, including living individuals as well as samples extracted from herbarium collections and peat formations 100 – 150 years old. “The increase in CO2 by about 100 parts per million has had a profound effect on the number of stomata and, to a lesser extent, the size of the stomata,” said IU’s David Dilcher. “Our analysis of that structural change shows there’s been a huge reduction in the release of water to the atmosphere.”

Most plants use stomata on the undersides of leaves to absorb CO2 from the air. The CO2is used to build sugars, which can be used by the plant as energy or for incorporation into the plants’ fibrous cell walls. Stomata also allow plants to “transpire” water, or release water to the atmosphere. Transpiration helps drive the absorption of water at the roots, and also cools the plants. Fewer stomata means gas exchange and transpiration will be limited.

Dilcher explained the significance of the findings by noting that while the carbon cycle is important, the water cycle is equally so. “If transpiration decreases, there may be more moisture in the ground at first, but if there’s less rainfall that may mean there’s less moisture in the ground eventually. This is part of the hyrdrogeologic cycle. Land plants are a crucially important part of it.”

While it is well known that long-lived plants can adjust their number of stomata each season depending on growing conditions, little is known about the long-term structural changes in stomata over periods of decades or centuries. “The hydrogeologic cycle is complex. It’s hard to predict how changing one thing will affect other aspects,” opined Dilcher. “We would have to see how these things play out. Plant adaptation to rising CO2is currently altering the hydrological cycle and climate and will continue to do so throughout this century.”