You are here: Home › News › Space › Discoverer of alien bacteria says life probably exists “everywhere”
By Will Parker on March 7, 2011 in News, Space 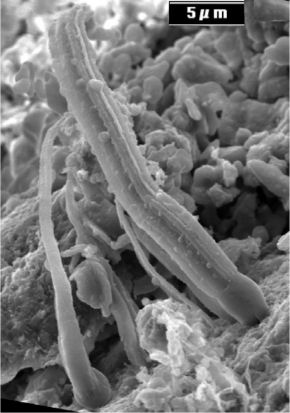 NASA scientist Richard B. Hoover has sparked controversy with claims that he has identified bacterial microfossils in several meteorites. If proved correct, the implications are that life is common throughout the universe, and that life on Earth may have come from other planets.

Hoover’s paper is set to be published in The Journal of Cosmology this week after the journal’s editors took the unusual step of inviting 100 cosmologists and 5,000 scientists from various disciplines to review the paper and to offer their critical analysis. “No other paper in the history of science has undergone such a thorough analysis, and no other scientific journal in the history of science has made such a profoundly important paper available to the scientific community,” crowed Dr. Rudy Schild, Editor-in-Chief of The Journal of Cosmology.

Hoover is not the first scientist to claim to have found evidence of alien life in meteorites. In 1996, another NASA scientist, David McKay, argued for the existence of nanofossils inALH84001, a meteorite found in Antarctica that originated from Mars. The announcement of possible extraterrestrial life caused considerable controversy at the time and even prompted president Bill Clinton to make a televised announcement to mark the event.

McKay’s claims faced great scrutiny at the time and the arguments of his detractors centered on whether the nanofossils he had identified were in fact the remains of biological organisms or simply mineral deposits formed by crystallization. Such arguments have plagued the concept of nanobacteria generally, and there is no scientific consensus about whether plain old terrestrial nanobacteria exist, let alone extraterrestrial nanobacteria. In 2009, however, a NASA team reexamined McKay’s samples using more advanced analytical instruments and concluded that there is “strong evidence that life may have existed on ancient Mars.”

Hoover’s new claims are unlikely to attract the same sorts of criticism that greeted McKay. This is chiefly because Hoover’s microfossils are several orders of magnitude larger than McKay’s nanofossils. Additionally, Hoover’s fossils resemble well recognized Earth-bound trichomic cyanobacteria and other trichomic prokaryotes such as filamentous sulfur bacteria. The Achilles’ heel of Hoover’s work is demonstrating that the fossils were indigenous to the meteorite and not formed after the meteor crashed to Earth.

Additionally, Hoover also detected filaments that exhibited structures consistent with the specialized cells and structures used by cyanobacteria for reproduction, nitrogen fixation and attachment or motility.

To test whether the bacterial remains were truly indigenous to the meteorites, Hoover used energy dispersive X-ray spectroscopy (EDS) to measure nitrogen content. He found that the nitrogen content of the meteorite filaments was almost always below the detection limit of the EDS detector. This is significant as EDS analysis of terrestrial minerals and biological materials indicate that nitrogen remains detectable for thousands of years. Since nitrogen is undetectable in the meteorite fossils, Hoover argues they are indeed indigenous, rather than modern terrestrial biological contaminants that entered the meteorites after arrival on Earth.

“This finding has direct implications to the distribution of life in the cosmos,” Hoover concluded.

Related:
Could Tempel 1 Harbor The Seeds Of Life?
“Hot” Comets The Source Of Life?
DNA Precursors In Meteorite Confirmed As Extraterrestrial
Living Bacteria From Space?
Comets May Spread Life From Earth Around Galaxy

Source: The Journal of Cosmology