You are here: Home › News › New link found between yoga and “feel-good” brain chemical
By Will Parker on August 20, 2010 in News 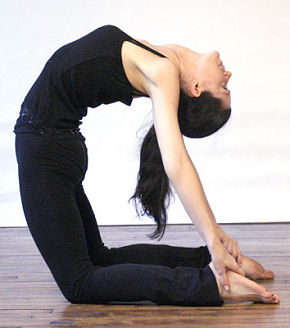 After finding a link between yoga postures and increased gamma-aminobutyric (GABA) levels in the brain, Boston University School of Medicine researchers suggest that yoga may be superior to other forms of exercise in its positive effect on mood and anxiety. GABA is known to induce relaxation, reduce stress and anxiety, and increase alertness.

The researchers set out to contrast the brain GABA levels of yoga subjects with those of participants who spent time walking. Low GABA levels are associated with depression and other widespread anxiety disorders.

The researchers followed two randomized groups of healthy individuals over a 12-week long period. One group practiced yoga three times a week for one hour, while the remaining subjects walked for the same period of time. Using magnetic resonance spectroscopic imaging, the participants’ brains were scanned before the study began. At week 12, the researchers compared the GABA levels of both groups before and after their final 60-minute session.

Each subject was also asked to assess his or her psychological state at several points throughout the study, and those who practiced yoga reported a more significant decrease in anxiety and greater improvements in mood than those who walked. “Over time, positive changes in these reports were associated with climbing GABA levels,” said lead author Chris Streeter.

According to Streeter, this promising research warrants further study of the relationship between yoga and mood, and suggests that the practice of yoga be considered as a potential therapy for certain mental disorders.