You are here: Home › News › Astronomers cop an eyeful of giant planet’s demise
By Will Parker on February 25, 2010 in News 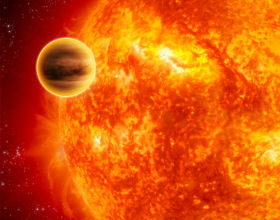 An international group of astrophysicists have been documenting how the massive exoplanet known as WASP-12b is being stretched, distorted and slowly destroyed by its host star. According to the astronomers, the slow-mo destruction represents a one-of-a-kind opportunity to observe how a planet enters the final stage of its life. “This is the first time that astronomers are witnessing the ongoing disruption and death march of a planet,” says UC Santa Cruz professor Douglas N.C. Lin, co-author of the new report appearing in Nature.

WASP 12-b, discovered in 2008, is one of the most enigmatic of the 400-plus exoplanets that have been found over the past 15 years. It orbits a star, in the constellation Auriga, roughly similar in mass to our sun. Like most known extra-solar planets, it is large and gaseous, resembling Jupiter and Saturn. But unlike Jupiter, Saturn or most other extra-solar planets, it orbits its parent star at extremely close range – just over 1 million miles. It is also larger than astrophysical models would predict. Its mass is estimated to be almost 50 percent heavier than Jupiter and it is 80 percent larger, giving it six times Jupiter’s volume. It is also unusually hot, with a daytime temperature of more than 2500& #176;C.

To understand the mechanism responsible for expanding the planet to such an unexpected size, the researchers have focused their analysis on tidal forces, which they say are strong enough to produce the effects observed on WASP 12b.

On Earth, modest tidal forces between the Earth and the Moon cause local sea levels rise and fall. WASP-12b, however, is so close to its host star that the gravitational forces are enormous. The tremendous tidal forces acting on the planet completely change the shape of the planet into something similar to that of a gridiron football.

These tides not only distort the shape of WASP 12-b. By continuously deforming the planet, they also create friction in its interior. The friction produces heat, which causes the planet to expand. “This is the first time that there is direct evidence that internal heating [or tidal heating] is responsible for puffing up the planet to its current size,” says Lin.

Huge as it is, WASP 12-b faces an early demise, say the astronomers. In fact, its size is part of its problem. It has ballooned to such a point that it cannot retain its mass against the pull of its parent star’s gravity. As the study’s lead author, Shu-lin Li, of the National Astronomical Observatories of China explains; “WASP-12b is losing its mass to the host star at a tremendous rate of six billion metric tons each second. At this rate, the planet will be completely destroyed by its host star in about ten million years. This may sound like a long time, but for astronomers it’s nothing. This planet will live less than 500 times less than the current age of the Earth.”

The material that is stripped off WASP-12b does not directly fall onto the parent star. Instead, it forms a disk around the star and slowly spirals inwards. A careful analysis of the orbital motion of WASP-12b suggests circumstantial evidence of the gravitational force of a second, lower-mass planet in the disk. This planet is most likely a massive version of the Earth – a so-called “super-Earth.”