You are here: Home › News › New World Record For Solar Conversion Efficiency
By Will Parker on February 14, 2008 in News 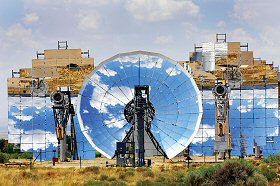 The solar dish generates electricity by focusing the sun’s rays onto a receiver, which transmits the heat energy to a Stirling engine. The engine is a sealed system filled with hydrogen. As the gas heats and cools, its pressure rises and falls. The change in pressure drives the pistons inside the engine, producing mechanical power, which in turn drives a generator and makes electricity.

“Gaining two whole points of conversion efficiency in this type of system is phenomenal,” says Bruce Osborn, SES president and CEO. “This is a significant advancement that takes our dish engine systems well beyond the capacities of any other solar dish collectors and one step closer to commercializing an affordable system.”

While all the enhancements led to a better system, the weather also played a pivotal role. “It was a ‘perfect storm’ of sorts,” Andraka says. “We set the record on Jan. 31, a very cold and extremely bright day, a day eight percent brighter than normal.” The temperature, which hovered around freezing, allowed the cold portion of the engine to operate at about 23 degrees C, and the brightness means more energy was produced while most parasitic loads and losses are constant. The test ran for two and a half hours, and a 60-minute running average was used to evaluate the power and efficiency data, in order to eliminate transient effects. During the testing phase, the system produced 26.75 kW net electrical power.