You are here: Home › News › Race Is On For Efficient Organic Solar Cells
By Will Parker on October 16, 2005 in News 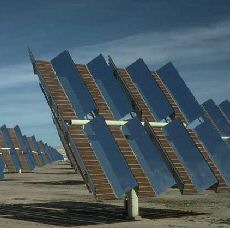 With the cost of fossil fuels rising, attention is once again turning to organic solar cells, which can produce electricity much more cheaply than conventional silicon based solar cells. However, organic polymer solar cells have to date been plagued by low efficiency, typically converting the sun’s energy to electricity at levels of around 1 or 2 percent.

But that may be about to change, with two teams of university researchers making announcements last week of improvements to organic cells that yield much better efficiencies. Traditional silicon solar cells yield around 15 to 20 percent efficiency rates. But with silicon cells, costs are prohibitive, largely due to the computer industry’s insatiable demand for silicon.

The team from the University of California – Los Angeles (UCLA) is using a single layer of plastic sandwiched between two conductive electrodes. The researchers say that their cell is easy to mass-produce and costs about one-third of traditional silicon solar technology. Independent tests on the UCLA solar cell carried out by the National Renewable Energy Laboratory (NREL) found an efficiency rate of 4.4 percent.

“As in any research, achieving precise efficiency benchmarks is a critical step,” UCLA researcher Yang Yang said. “Particularly in this kind of research, where reported efficiency numbers can vary so widely, we’re grateful to the NREL for assisting us in confirming the accuracy of our work.” Writing in Nature Materials, Yang predicted that given the strides the team has made with the technology, they will be able to double the efficiency in a very short period of time. The target for polymer solar cell performance is ultimately about 15 to 20 percent efficiency, with a 15 to 20 year lifespan.

Yang says the 4.4 percent efficiency achieved by UCLA is the highest number yet published for plastic solar cells. But that may soon change with reports from researchers at the New Mexico State University (NMSU) and Wake Forest claiming 5.2 percent efficiency rates. The organic cells being developed by this team are made of plastic that is relatively inexpensive, flexible, can be wrapped around structures or even applied like paint.

NMSU physicist Seamus Curran believes a mass market is not far away. “Conventional thinking has been that that landmark [in efficiency] was at least a decade away. This means we are closer to making organic solar cells that are available on the market. With this group’s research, it may be only four or five years before plastic solar cells are a reality for consumers.”

He added that the importance of the breakthrough cannot be underestimated as a cheap, flexible plastic made of a polymer blend would revolutionize the solar market. “Our expectation is to get beyond 10 percent in the next five years. Our current mix is using polymer and carbon buckyballs [fullerenes] and good engineering from Wake Forest and unique NSOM [near-field scanning optical microscopy] imaging from NMSU to get to that point.”