You are here: Home › News › Hubble Captures Birth Of A Planet
By Will Parker on January 6, 2007 in News 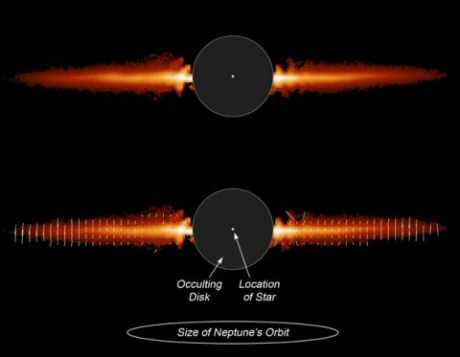 The Hubble Space Telescope has captured images of a “blizzard” of particles in a disk around a young star, shedding light on the process by which planets form from tiny dust grains. They were detected in a disk encircling the 12-million-year-old star AU Microscopii which is 32 light-years distant in the southern constellation of Microscopium.

Analyzing the starlight reflecting off the debris disk, the astronomers concluded that the particles are fluffy and roughly ten times larger than typical interstellar dust grains. The fluffiness suggests that the particles were shed by much larger, but unseen snowball-sized objects that had gently collided with each other around 4 billion miles from the star. These unseen objects are believed to reside in a region dubbed the “birth ring,” first hypothesized in 2005 by Berkeley astronomers Linda Strubbe and Eugene Chiang. As the larger objects bump into each other, they release fluffy particles that are propelled outward by the intense pressure from the sun’s rays.

“We have seen many seeds of planets and we have seen many planets, but how they go from one to the other is a mystery,” said astronomer James Graham of the University of California at Berkeley and leader of the Hubble observations. “These observations begin to help us fill in that gap.” Graham and his colleagues were surprised that fluffy particles could even form in a disk. “Circumstellar disks are thought to be vigorous, turbulent places,” he explained. “It is hard to understand why fluffy particles could grow and survive under such circumstances. But maybe there are some backwater places where turbulence had subsided and porous particles can form and grow. Planet-forming disks are undoubtedly much more complex than we currently envision.”