You are here: Home › News › Venus Express At Critical Juncture
By Will Parker on April 10, 2006 in News 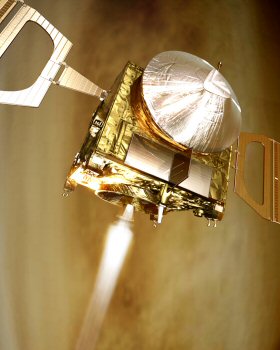 After a November 9 launch from a Soyuz-Fregat rocket last year, the European Space Agency’s (ESA) Venus Express has traveled 400 million kilometers and is currently completing some final maneuvering that will hopefully put the spacecraft into a Venus orbit by April 13. The critical maneuvers have been spread over 9 days to reduce the chances of an error occurring, which might prove difficult to correct at the 29,000 kilometers per hour velocity the craft is traveling at.

Further orbital tweaking will then continue for several days before the mission proper gets underway. So far, all aspects of this phase of the mission have gone according to plan, and contingencies reserved for any unforeseen mishap have not been required.

Venus Express’ 9-day preliminary elliptical orbit will range from 350,000 kilometers at its furthest point from the planet (apocentre) to less than 400 kilometers at its closest (pericentre). During this phase the vessel will conduct 2 further burns using its main engine and 5 more with its thrusters to reduce the apocentre of subsequent orbits, with its final orbit achieved by May 7. This final orbit will be a polar orbit that ranges from 250 – 66,000 kilometers from Venus. The ESA team considers the 9-day preliminary polar orbit a great opportunity to make some initial scientific observations, as the face of Venus will be entirely visible to the craft’s imaging instruments.

Many of the primary goals of the mission involve delving into some of Venus’ more perplexing questions, including the planet’s so far inexplicable atmospheric conditions. How, for instance, do Venus’ complex atmospheric dynamics and cloud system work, and what causes the fast “super-rotation” of the atmosphere at the cloud top? And Venus Express’ final orbit is far from arbitrary, as ESA scientists would like to get a closer look at the double vortex at the North Pole.

In fact, the orbit chosen provides scientists with the best possible vantage point to continuously view the Venusian atmosphere and systematically examine its many dynamical facets. From a distance of 200,000 kilometers or greater, the vessel’s ultraviolet/visible/near-infrared mapping spectrometer (VIRTIS) will be able to snap pics of the whole planetary disc and atmosphere, which will provide scientists with greater context and understanding of the planet’s diverse atmospheric conditions. This understanding will be aided further by a database of atmospheric images gradually built up in mosaics. Instruments such as the analyzer of space plasma and energetic atoms (ASPERA) will have the unique opportunity of studying Venus’ solar wind and the processes associated with a planet that has no magnetic defenses.

Relative to the Earth, the atmosphere on Venus is hostile to say the least, predominantly composed of carbon dioxide with clouds of sulphuric acid vapor, reaching temperatures of 500& #176;C at the surface. This extreme climate may let scientists glean important information on the greenhouse effect to determine what the Earth may look like in the future.

The ESA team also hopes that Venus Express will reveal valuable information on the planet’s geology and whether there is any evidence of seismic or volcanic activity. The entire scientific data-gathering phase of the Venus Express mission will take place over 2 Venusian days – the equivalent of 486 Earth days!