You are here: Home › News › Ancient wildfire prevention technique reaps carbon credits
By Will Parker on November 30, 2009 in News 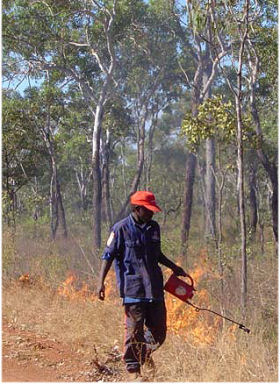 An Australian project that dramatically reduces the extent and severity of natural blazes by using traditional indigenous fire management techniques is being hailed as a model with enormous potential in the fights against climate change and biodiversity loss.

Biomass burning (including savanna wildfires) accounts for 10-20 percent of global greenhouse gas emissions, a large portion of which comes from Africa and northern Australia.

Australia’s West Arnhem Land Fire Abatement (WALFA) project is expected to eventually lead to at least 1 million tonnes worth of carbon credits annually, creating over 200 new jobs in traditional Northern Australia indigenous communities. WALFA project members are heading to the climate change talks in Copenhagen where they will propose that similar projects can be adopted in the savannas of Africa, where the potential for reductions is huge.

The project has led to a landmark greenhouse gas offset agreement between resources giant ConocoPhillips and the indigenous peoples in west Arnhem Land. Building on the WALFA pilot, the North Australian Indigenous Land and Sea Management Alliance (NAILSMA) has raised $7.8 million from the Australian government towards $30 million required to develop and administer four additional projects. “The many compelling side benefits of the initiative include the protection of biodiversity, cultural heritage and landscapes of global importance,” says NAILSMA CEO Joe Morrison.

NAILSMA, in partnership with United Nations University (UNU), is looking to share its experience with local communities and other stakeholders around the world through workshops, guides, video material and other sources.

“This experience is the best example in the world of indigenous and local communities using the emerging carbon market to develop culturally appropriate livelihoods. The lessons learnt from this experience are invaluable, especially now that there are billions of dollars available to local communities worldwide to help them take climate change mitigation and adaptation measures,” noted UNU rector Konrad Osterwalder.

Professor Chris Justice, from the University of Maryland, agrees that the WALFA project is a valuable template for controlling African savannah fires. “The vast majority of all savannah fires globally occur on the African continent. The ground-level ozone, smoke and accompanying gases and particulates create a public health hazard during an area’s burning season,” he explained. “The WALFA Project demonstrates a valuable, alternative way to help Africa’s poorest not only play a role mitigating climate change, but also to develop sustainable livelihoods to tackle their main issue – poverty.”

Related:
Fires account for 20% of CO2 emissions
Aussie Deserts Created By Ancient Fires
Did human-induced climate change begin thousands of years ago?
Developing World Antes Up In Greenhouse Game
More about the project