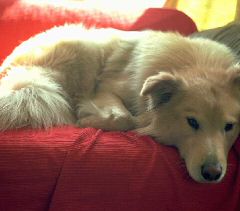 Cancer detection in the kennel? It just might be the best way to identify cancer if results from a recent study hold up. The researchers involved say that dogs have an uncanny ability to sniff out lung and breast cancer in its early stages of development.

Published in the journal Integrative Cancer Therapies, the study reveals evidence that a dog’s extraordinary scenting ability can distinguish people with both early and late stage lung and breast cancers from healthy control subjects. The research was carried out in California and was recently documented by the BBC in the United Kingdom.

Dogs olfactory capabilities have been recognized in other studies that demonstrated their ability to identify chemicals in extremely dilute solutions.

Cancer detection was first noted in the case report of a dog alerting its owner to the presence of a melanoma by constantly sniffing the skin lesion. Subsequent studies confirmed the ability of trained dogs to detect both melanomas and bladder cancers. The new study – led by Michael McCulloch of the Pine Street Foundation and Tadeusz Jezierski of the Polish Academy of Sciences – is the first to test whether dogs can detect cancers only by sniffing the exhaled breath of cancer patients.

In the new study, five ordinary dogs were trained over a 3-week period to detect lung or breast cancer by sniffing the breath of cancer participants. The trial itself was comprised of 86 cancer patients (55 with lung cancer and 31 with breast cancer) and a control sample of 83 healthy patients. All cancer patients had recently been diagnosed with cancer through biopsy-confirmed conventional methods such as a mammogram, or CAT scan and had not yet undergone any chemotherapy treatment. During the study, the dogs were presented with breath samples from the cancer patients and the controls, captured in a special tube. The dogs were trained to give a positive identification of a cancer patient by sitting or lying down directly in front of a test station containing a cancer patient sample, while ignoring control samples.

The results showed that dogs can detect breast and lung cancer with sensitivity and specificity between 88 percent and 97 percent. Moreover, the study also confirmed that the trained dogs could even detect the early stages of lung cancer, as well as early breast cancer. The researchers concluded that breath analysis has the potential to provide a substantial reduction in the uncertainty currently seen in cancer diagnosis.