You are here: Home › Health › Genetics › News › Quadruple helix DNA discovered in human cells
By Will Parker on January 20, 2013 in Genetics, News 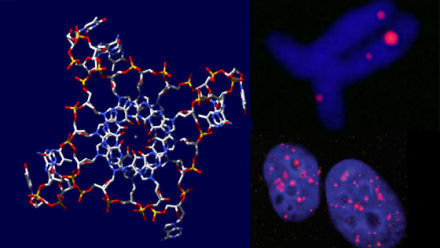 Cambridge University researchers have published a paper in Nature Chemistry showing that four-stranded “quadruple helix” DNA structures exist within the human genome. The new discovery coincides with the 60th anniversary of Watson and Crick’s first description of the interweaving double helix DNA structure – the chemical code for all life.

Studies over the last couple of decades had shown that quadruplex DNA can form in vitro, but the structure was considered to be a curiosity rather than a feature found in living things. The researchers now know for the first time that they actually form in the DNA of human cells.

The findings are the culmination of over 10 years investigation using computational modeling, synthetic lab experiments, and finally the identification of the quad structures in human cancer cells. The paper notes clear links between concentrations of the four-stranded quadruplexes (known as G-quadruplexes) and the process of DNA replication, which is pivotal to cell division and production.

The paper explains that while quadruplex DNA is found fairly consistently throughout the genome of human cells and their division cycles, a marked increase was shown during thes-phase – the point in a cell cycle where DNA replicates before the cell divides.

The researchers speculate that by targeting quadruplexes with synthetic molecules that trap and contain these DNA structures – preventing cells from replicating their DNA and consequently blocking cell division – it may be possible to halt the runaway cell proliferation at the root of cancer.

“We are seeing links between trapping the quadruplexes with molecules and the ability to stop cells dividing, which is hugely exciting,” said Cambridge’s Professor Shankar Balasubramanian. “The research indicates that quadruplexes are more likely to occur in genes of cells that are rapidly dividing, such as cancer cells. For us, it strongly supports a new paradigm to be investigated – using these four-stranded structures as targets for personalized treatments in the future.”

Balasubramanian explained that if an inhibitor is used to block DNA replication, quadruplex levels go down – proving the idea that DNA is dynamic, with structures constantly being formed and unformed. “The data supports the idea that certain cancer genes can be usefully interfered with by small molecules designed to bind specific DNA sequences.”

While many current cancer treatments attack DNA, Balasubramanian said they were often akin to a scattergun approach. The new findings, however, hint at a more tailored approach to stopping cancer. “The possibility that particular cancer cells harboring genes with these motifs can now be targeted, and appear to be more vulnerable to interference than normal cells, is a thrilling prospect. The quadruple helix DNA structure may well be the key to new ways of selectively inhibiting the proliferation of cancer cells,” he concluded.