You are here: Home › News › Genetic Basis For Human-Primate Differences Found
By Will Parker on March 6, 2003 in News 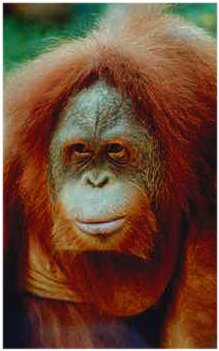 Perlegen Sciences, Inc. today announced the publication of a scientific paper in the latest issue of the peer-reviewed journal Genome Research. The paper, “Genomic DNA insertions and deletions occur frequently between humans and nonhuman primates,” describes novel findings suggesting that genomic rearrangements, not single base pair changes in DNA, provide the genetic basis for the differences between humans and non-human primates such as the chimpanzee.

“This is a very surprising and important discovery of the fundamental basis of structural genomic differences between humans and other primates,” said David Cox, M.D., Ph.D, Perlegen’s Chief Scientific Officer. “It provides a valuable starting point from which to improve our understanding of what makes human beings unique.”

Analysis of the differences in sequence between human and chimpanzee DNA has previously established that the two species are approximately 98.5% identical. For this reason, it is widely accepted that qualitative and quantitative differences in gene expression are responsible for the major biological differences among humans, chimpanzees and other non-human primates. To date it has been commonly thought that single base pair changes in these genomes, not larger DNA rearrangements, would underlie the majority of these postulated genomic regulatory differences.

“Comparative genome analysis of human and non-human primates is a useful technique for deciphering the function of specific genomic regions,” commented Kelly Frazer, Ph.D., Senior Director of Genomic Biology at Perlegen and the lead author on the paper. “This study illustrates the power and versatility of Perlegen’s high-density array technology in the detection of DNA rearrangements.”

Comparison of human chromosome 21 with chimpanzee, orangutan, rhesus macaque, and woolly monkey DNA sequences identified a significant number of random genomic rearrangements between human and nonhuman primate DNA. This evidence shows, contrary to popular belief, that genomic rearrangements have occurred frequently during primate genome evolution and are a significant source of variation between humans and chimpanzees as well as other primates. These DNA rearrangements are commonly found in segments containing genes, suggesting possible functional consequences and therefore provide natural starting points for focused investigations of variations in gene expression between humans and other primates, including variations which may provide important clues in researching human health and disease.

Testosterone A Mixed Blessing For Songbirds