You are here: Home › News › New Evidence For Solar Systems Like Ours
By Will Parker on October 14, 2002 in News 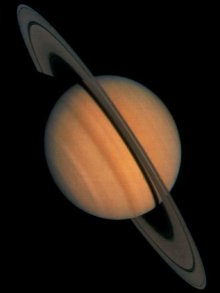 An international team of astronomers reports the first strong evidence for the existence of massive planets on wide orbits – like those of Saturn, Uranus and Neptune – around many stars. The new research provides some of the strongest evidence so far that solar systems similar to our own, or even larger, are likely to exist.

The research team reports the discovery of a huge distorted disk of cold dust surrounding Fomalhaut (pronounced Fo-mal-ought), one of the brightest stars in the sky. Fomalhaut is located about 25 light years away from our sun, is estimated to be 2.3 times as massive as the sun and about 1.7 times the diameter.

The most likely cause of the distortion is the gravitational influence of a Saturn-like planet at a large distance from the star tugging on the disk. The new observations of Fomalhaut are reported in a paper to be published in the Astrophysical Journal — the most widely read journal in astronomy.

One hundred planets are already known to exist outside our solar system, none of which has yet been seen directly by a telescope. These planets, nicknamed “hot-Jupiters,” are roughly the size of the planet Jupiter, but have orbits much closer to their star than Jupiter’s is to our sun.

“What is new and exciting about the observation of Fomalhaut is that it probes the space much more distant from the star – on scales of the orbits of Uranus, Neptune and beyond,” said Wayne Holland of the UK Astronomy Technology Centre (UK ATC) in Edinburgh, who led the research team. “We were amazed to find that the disk is actually bent around the star. This strongly suggests there is an orbiting giant planet shaping the dust we see.”

Fomalhaut, which lies in the constellation of Piscis Austrinus (the Southern Fish), is only about 200 million years old – an infant compared to our sun at 4.5 billion years. Fomalhaut, the 17th-brightest star in the sky, derives from the Arabic name for this star, Fum al Hut, meaning “The Fish’s Mouth.” The alternative Latin names for the star, Os Piscis Meridiani or Os Piscis Notii, mean “The Mouth of the Southern Fish.”

“We believe Fomalhaut’s solar system looks quite similar to our own solar system when it was only 200 million years old,” Zuckerman said. “At that age, a planetary system already would have formed. We would have trouble seeing it with optical telescopes because of the shroud of dust.”

The research team presented widely reported findings on Fomalhaut in 1998, and has an image now with twice the resolution of the 1998 image.

“Our previous image did not have the resolution to pinpoint the detail we are now seeing,” said Jane Greaves, one of Holland’s colleagues on the project. “We could see a hole in the disk near the star, and thought it was cleared out by the gravity of a planet like Jupiter, but we had no idea there was anything further from the star.”

The dust disk surrounding Fomalhaut is so cold, and emits so little light, that it is completely invisible to optical telescopes such as the Hubble Space Telescope. Instead, the astronomers used a telescope and camera that operate in the so-called “submillimeter” region of the electromagnetic spectrum, which lies between infrared light and radio waves.

The astronomers see the effect of the large planet on the dust, and infer the planet’s existence from the asymmetrical dust. The distribution of the dust is shaped by the gravitational field of the unseen planet.

Holland’s team used the James Clerk Maxwell Telescope (JCMT) at the summit of Mauna Kea, Hawaii, the world’s largest telescope dedicated to the study of light at submillimeter wavelengths. With a specially cooled camera called SCUBA, they were able to measure the tiny amounts of heat radiated by the dust particles that make up the disk.

SCUBA (Submillimeter Common User Bolometer Array), which was built at the Royal Observatory, Edinburgh, has detectors that are cooled to just one-tenth of a degree above absolute zero (-273 degrees Celsius). It has already found young nurseries where stars are being born and has discovered distant galaxies near the edge of the Universe.

The research team is now analyzing SCUBA pictures of additional bright stars, including Vega – in the constellation of Lyra and the brightest star in our summer sky – which also show very clear evidence of gravitationally disturbed dusty disks. It is the dusty structures visible in the SCUBA images that indicate that massive planets having orbits as large as or larger than those of Saturn, Uranus and Neptune must exist around many other stars, Zuckerman and Holland concluded. Even though no such planet has yet been imaged directly, the SCUBA images yield the first good observational evidence that massive planets with big orbits “are really out there,” Zuckerman said.

The disk appears a bit like a doughnut with a hole in the center around the star. “The Fomalhaut disk is close to edge-on as we see it, and in the image it looks like the ends of the ‘doughnut’ are brighter,” Greaves said. “The disk is about the same size as the sun’s Kuiper Belt of comets which orbits outside Neptune and Pluto, so we may be seeing a region near Fomalhaut that has many millions of comets.”

While the new data do provide strong evidence for massive planets at a much more desirable location for Earth-like planets to exist, Zuckerman still believes intelligent life in the universe is extremely rare, and perhaps unique to Earth.

The astronomers plan a new survey of more than 100 nearby stars. Holland is also leading a team to build a new, more powerful camera (“SCUBA-2”).

“SCUBA-2 will be able to image disks, such as the one around Fomalhaut, in just a few minutes, instead of the many tens of hours it currently takes,” said Ian Robson, deputy director of the UK ATC.