You are here: Home › News › Naps Vital For Efficient Brain Function
By Will Parker on July 4, 2002 in News 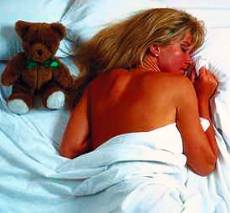 Evidence is mounting that sleep – even a nap – appears to enhance information processing and learning. New experiments by NIMH grantee Alan Hobson, M.D., Robert Stickgold, Ph.D., and colleagues at Harvard University show that a midday snooze reverses information overload and that a 20 percent overnight improvement in learning a motor skill is largely traceable to a late stage of sleep that some early risers might be missing. Overall, their studies suggest that the brain uses a night’s sleep to consolidate the memories of habits, actions and skills learned during the day. The bottom line: we should stop feeling guilty about taking that “power nap” at work or catching those extra winks the night before our piano recital.

Reporting in the July, 2002 Nature Neuroscience, Sara Mednick, Ph.D., Stickgold and colleagues demonstrate that “burnout” – irritation, frustration and poorer performance on a mental task — sets in as a day of training wears on. Subjects performed a visual task, reporting the horizontal or vertical orientation of three diagonal bars against a background of horizontal bars in the lower left corner of a computer screen.

Their scores on the task worsened over the course of four daily practice sessions. Allowing subjects a 30-minute nap after the second session prevented any further deterioration, while a 1-hour nap actually boosted performance in the third and fourth sessions back to morning levels.

Rather than generalized fatigue, the researchers suspected that the burnout was limited to just the brain visual system circuits involved in the task. To find out, they engaged a fresh set of neural circuitry by switching the location of the task to the lower right corner of the computer screen for just the fourth practice session. As predicted, subjects experienced no burnout and performed about as well as they did in the first session — or after a short nap.

This led the researchers to propose that neural networks in the visual cortex “gradually become saturated with information through repeated testing, preventing further perceptual processing.” They think burnout may be the brain’s “mechanism for preserving information that has been processed but has not yet been consolidated into memory by sleep.”

So how might a nap help? Recordings of brain and ocular electrical activity monitored while napping revealed that the longer 1-hour naps contained more than four times as much deep, or slow wave sleep and rapid eye movement (REM) sleep than the half-hour naps. Subjects who took the longer naps also spent significantly more time in a slow wave sleep state on the test day than on a “baseline” day, when they were not practicing. Previous studies by the Harvard group have traced overnight memory consolidation and improvement on the same perceptual task to amounts of slow wave sleep in the first quarter of the night and to REM sleep in the last quarter. Since a nap hardly allows enough time for the latter early morning REM sleep effect to develop, a slow wave sleep effect appears to be the antidote to burnout.

Neural networks involved in the task are refreshed by “mechanisms of cortical plasticity” operating during slow wave sleep, suggest the researchers. “Slow wave sleep serves as the initial processing stage of experience-dependent, long-term learning and as the critical stage for restoring perceptual performance.”

The Harvard team has now extended to a motor-skill task their earlier discovery of sleep’s role in enhancing learning of the perceptual task. Matthew Walker, Ph.D., Hobson, Stickgold and colleagues report in the July 3, 2002 Neuron that a 20 percent overnight boost in speed on a finger tapping task is accounted for mostly by stage 2 non-rapid eye movement (NREM) sleep in the two hours just before waking.

Prior to the study, it was known that people learning motor skills continue to improve for at least a day following a training session. For example, musicians, dancers and athletes often report that their performance has improved even though they haven’t practiced for a day or two. But until now it was unclear whether this could be ascribed to specific sleep states instead of simply to the passage of time.

In the study, 62 right-handers were asked to type a sequence of numbers (4-1-3-2-4) with their left hand as rapidly and accurately as possible for 30 seconds. Each finger tap registered as a white dot on a computer screen rather than the number typed, so subjects didn’t know how accurately they were performing. Twelve such trials separated by 30-second rest periods constituted a training session, which was scored for speed and accuracy.

Regardless of whether they trained in the morning or the evening, subjects improved by an average of nearly 60 percent by simply repeating the task, with most of the boost coming within the first few trials. A group tested after training in the morning and staying awake for 12 hours showed no significant improvement. But when tested following a night’s sleep, their performance increased by nearly 19 percent. Another group that trained in the evening scored 20.5 percent faster after a night’s sleep, but gained only a negligible 2 percent after another 12 hours of waking. To rule out the possibility that motor skill activity during waking hours might interfere with consolidation of the task in memory, another group even wore mittens for a day to prevent skilled finger movements. Their improvement was negligible — until after a full night’s sleep, when their scores soared by nearly 20 percent.

Sleep lab monitoring of 12 subjects who trained at 10 PM revealed that their improved performance was directly proportional to the amount of stage 2 NREM sleep they got in the fourth quarter of the night. Although this stage represents about half of a night’s sleep overall, Walker said he and his colleagues were surprised at the pivotal role stage 2 NREM plays in enhancing learning of the motor task, given that REM and SWS sleep had accounted for the similar overnight learning improvement in the perceptual task.

They speculate that sleep may enhance motor skill learning via powerful bursts of synchronous neuronal firing, called “spindles,” characteristic of stage 2 NREM sleep during the early morning hours. These spindles predominate around the center of the brain, conspicuously near motor regions, and are thought to promote new neural connections by triggering an influx of calcium into cells of the cortex. Studies have observed an increase in spindles following training on a motor task.

The new findings have implications for learning sports, a musical instrument, or developing artistic movement control. “All such learning of new actions may require sleep before the maximum benefit of practice is expressed,” note the researchers. Since a full night’s sleep is a prerequisite to experiencing the critical final two hours of stage 2 NREM sleep, “life’s modern erosion of sleep time could shortchange your brain of some learning potential,” added Walker.

The findings also underscore why sleep may be important to the learning involved in recovering function following insults to the brain’s motor system, as in stoke. They also may help to explain why infants sleep so much. “Their intensity of learning may drive the brain’s hunger for large amounts of sleep,” suggested Walker.