You are here: Home › News › Unmanned Helicopter Breakthrough
By Will Parker on July 26, 2011 in News 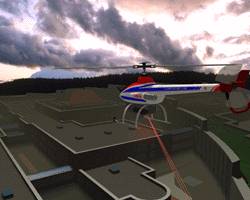 Piloting a helicopter can be like busting a bucking bronco. Pilots must battle the helicopter’s innate tendency to accelerate in any direction, especially when hovering. Keeping a remote-controlled helicopter stable is an even more difficult task that requires expensive equipment and a ground operator with extensive training. As a result, unmanned aerial vehicles (UAVs) have been mostly limited to the military and the movie industry.

Now, unmanned helicopters are about to become easy to operate and affordable thanks to a stabilization system developed at the entrepreneurial incubator program at the Technion-Israel Institute of Technology in Haifa. With its patented mathematical formulas, this new UAV can hover steadily for long periods while shooting quality videos, can be operated by relatively untrained people essentially via the push of a button, and can take off from anywhere, even the roof of a car.

Since the inventor, Gadi Kalisch, an electrical engineer and remote controlled aircraft enthusiast, founded Steadicopter Ltd. in 1999, he has received inquiries from news organizations, electric power companies, law enforcement agencies, agricultural organizations and the military. His company has also received funding from the Israel Ministry of Defense for a joint project with Israel Aircraft Industries, and from private investors.

In UAVs, not only is stability an issue, but “all the controls are backwards,” Kalisch explains. “Right is left, left is right. Backward is forward and vice versa.” Steadicopter’s formulas take all this into account.

The system uses a computer, standard accelerometers, gyroscopes to maintain proper orientation, an altimeter to determine altitude, a compass, and conventional GPS (Global Positioning System) equipment like that used in automobile on-board navigation systems which receive signals from satellites in geosynchronous orbit.

“We don’t have to use hundred-thousand-dollar equipment because the algorithms [mathematical formulas] are very strong,” says Kalisch, who has been flying the Steadicopter system on a hobbyist’s five-foot-long helicopter. Installing the Steadicopter system on larger, more commercially practical helicopters will be easy, he says, since larger helicopters are easier to stabilize than smaller ones, which tend to react more to weather conditions.

The first commercial version, which will be ready within a year, is a hobby helicopter about 7.5-feet-long and some 30 pounds. It will carry up to 40 pounds of video equipment and will sell for approximately $125,000, depending on the electronic components installed. This is a fraction of the $1 million current UAVs cost.

“We are focusing on five applications,” said Kalisch. One will turn reporters into virtual Supermen. Though they won’t be able to jump tall buildings in a single bound, the Steadicopter will have that capability, taking off from the roof of a car and giving them real-time video access to hard-to-reach events.

Steadicopter may also be used in precision spraying of crops. Conventional ground-based equipment can identify vegetation, but cannot distinguish between food crops and other vegetation. Aerial pictures of fields taken with a multi-spectrum camera mounted on a Steadicopter will distinguish between crops and other vegetation. This information will be relayed to ground-based spraying equipment, which can direct the spray only at the crops, thus reducing the amount of chemicals, meeting increasingly stringent environmental standards and cutting costs.

Law enforcement agencies can make similar use of the Steadicopter, while electric utilities have shown an interest in launching infrared cameras to check for weaknesses in high-power lines. Militarily, the Steadicopter, which can attain altitudes of 10,000 feet but is hard to detect at 150 feet, can be used for surveillance.

Eventually Kalisch sees the Steadicopter system being installed in manned helicopters as well, making it easier for pilots to fly their unstable charges. Some manned military helicopters have stabilization systems that Kalisch claims do less than his system for more money