You are here: Home › Evolution › News › “Quantum jitter” mechanism behind the random mutations that drive evolution and cancer
By Will Parker on March 11, 2015 in Evolution, News 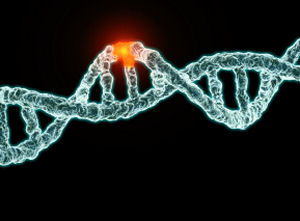 The molecular machines that copy DNA in a living cell are fast and accurate at pairing up the correct bases – G with C and A with T – into each new double helix.

They work by recognizing the shape of the right base pair combinations, and discarding those – such as a G and a T – that don’t fit together correctly. Yet for approximately every 10,000 to 100,000 bases copied, these machines make a mistake that if uncorrected will be immortalized in the genome as a mutation. Errors in DNA replication make evolution – and life as we know it – possible. But if there’s too many of them, our genes would mutate out of control and we wouldn’t survive.

Researchers have long wondered how these seemingly random errors are made. Some hypothesized that DNA bases can change shapes, transiently morphing into alternative states to trick the replication machinery into incorporating the wrong base pairs into the DNA. But no one has ever caught these tiny shape-shifters in action.

Now, a new study published in Nature suggests that “quantum jitters” appear to tune the frequency of these spontaneous mutations to just the right level.

The Duke University researchers behind the study say they have witnessed DNA bases making the slightest of changes – shifting a single atom from one spot to another or simply getting rid of it altogether – to temporarily mimic the shape of a different base. Duke biochemist Hashim M. Al-Hashimi said these jitters appear at about the same frequency that the DNA copying machinery makes mistakes, which might make them the basis of random genetic changes that drive evolution and diseases like cancer. The jitters are exceedingly rare and only flicker into existence for a millisecond, yet have far-reaching consequences.

Because DNA shape-shifting involves atomic-level movements in molecules, it has been impossible to detect by conventional methods. So Al-Hashimi’s team decided to use a sophisticated technique called NMR relaxation dispersion, which he likens to “MRI on steroids,” to visualize these fleeting, nearly invisible changes.

The team designed a model strand of double helix DNA that contained a G-T mispair. Then they used the NMR technique to track the migration of hydrogen atoms among the nitrogen and oxygen atoms of the G and T bases. Normally G doesn’t pair up very well with T, because they both have hydrogen atoms protruding from their surfaces that clash with each other.

It was originally hypothesized that the bases could nudge hydrogens out of the way to allow mismatched connections. Aided by the NMR technique, the researchers found the first direct evidence for just such an atomic rearrangement in a DNA duplex. They also showed that a similar phenomenon occurs in RNA, the chemical cousin of DNA.

This tiny movement, or “quantum jitter,” takes such an enormous amount of energy that bases are successful at accomplishing the feat only once out of every 10,000 or so “attempts.” Even then, they can only hold their new shape for a very short period of time – 50 to 200 microseconds – before the hydrogen pops back into its original position.

The researchers looked back at previous biological studies and found that these rare alternative states appeared in the DNA about as often as the polymerase machinery’s copying errors.

The new work sheds light on what could be the fundamental mechanism responsible for the random mutations that drive evolution and contribute to cancer. A better understanding of how these jitters arise could help in the development of new treatments to fight cancer cells and viruses, for example, forcing them to mutate at a quicker rate so they eventually stop functioning.

“We know that certain carcinogens like 5-bromouridine can make these jitters occur more frequently,” said lead author of the study Isaac J. Kimsey. “Therefore, we can use this knowledge to tailor drugs that more rapidly induce cancer cells or viruses to make so many mistakes that they mutate uncontrollably and eventually die.”

Instead of raising self esteem, we’re raising a generation of narcissists
Male genetic diversity strangled by wealth and power