You are here: Home › Humans › News › Hunting humans imitate honeybees
By Will Parker on December 23, 2013 in Humans, News 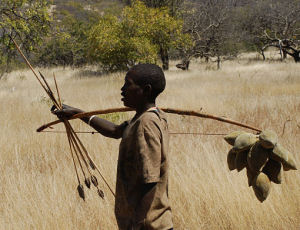 Working with the Hadza tribe in Africa, researchers have found that human hunter-gatherers follow the same mathematical pattern in their movements as sharks, honeybees, and many other animals. Published in the Proceedings of the National Academy of Sciences, the study used GPS trackers to show that human hunters follow the classic exploration pattern defined by the French mathematician Paul Lévy.

The Lévy walk, which involves a series of short movements in one area and then a longer trek to another area, has been observed previously in a study of human movements around an amusement park. The Lévy walk pattern appears to be ubiquitous in animals, but the new study represents the first time the behavior has been documented in human hunter-gatherers.

University of Arizona anthropologist David Raichlen, who led the study, said the Hadza are one of the last big-game hunters in Africa, and one of the last groups on Earth to still forage on foot using traditional methods. “If you want to understand human hunter-gatherer movement, you have to work with a group like the Hadza,” he said. 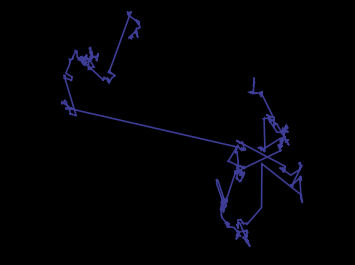 “Detecting this pattern among the Hadza, as has been found in several other species, tells us that such patterns are likely the result of general foraging strategies that many species adopt, across a wide variety of contexts,” said study co-author Brian Wood, an anthropologist at Yale University who has worked with the Hadza people for the last decade.

The researchers think that because the Lévy pattern seems to occur across species and across environments, it is likely a fundamental pattern grounded in evolutionary history.

Following a Lévy walk pattern does not mean that humans don’t consciously decide where they are going, Raichlen noted. “We definitely use memories and cues from the environment as we search,” he explained, “but this pattern seems to emerge in the process.”

In future studies, Raichlen and his colleagues hope to understand the reasons for using a Lévy walk and whether the pattern is determined by the distribution of resources in the environment. Describing human movement patterns could also help anthropologists to understand how humans transported raw materials in the past, how our home ranges expanded and how we interact with our environment today, Raichlen said.