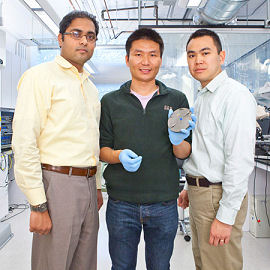 The human brain has around 86 billion neurons, connected by synapses that not only create logic circuits; they also continuously adapt to stimuli by strengthening some circuits while weakening others. This adaptive process in the brain is what enables humans to learn.

Now, Harvard scientists say they have created a new type of transistor that mimics the behavior of a synapse. Lead researcher Shriram Ramanathan (left, in pic) said the device simultaneously modulates the flow of information in a circuit and physically adapts to changing signals.

Reporting on his team’s work in Nature Communications, Ramanathan speculated that the device could usher in a new kind of artificial intelligence: one embedded not in software, but in the very hardware of the computer itself.

“The transistor we’ve demonstrated is really an analog to the synapse in our brains,” says co-researcher Jian Shi (center, in pic). “Each time a neuron initiates an action and another neuron reacts, the synapse between them increases the strength of its connection. And the faster the neurons spike each time, the stronger the synaptic connection. Essentially, it memorizes the action between the neurons.”

In our brains, calcium ions and receptors effect the changes in a synapse, while the artificial version achieves the same plasticity with oxygen ions. When a voltage is applied, these ions slip in and out of the crystal lattice of a very thin (80 nanometer) film of samarium nickelate, which acts as the synapse channel between two platinum “axon” and “dendrite” terminals. The varying concentration of ions in the nickelate raises or lowers its conductance – that is, its ability to carry information on an electrical current – and, just as in a natural synapse, the strength of the connection depends on the time delay in the electrical signal.

The device consists of the nickelate semiconductor sandwiched between two platinum electrodes and adjacent to a small pocket of ionic liquid. An external circuit multiplexer converts the time delay into a magnitude of voltage which it applies to the ionic liquid, creating an electric field that either drives ions into the nickelate or removes them. The entire device, just a few hundred microns long, is embedded in a silicon chip. 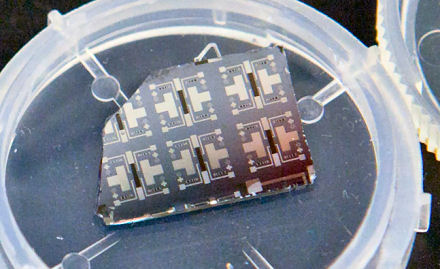 Unlike traditional silicon transistors, the synaptic transistor is not restricted to a binary system of ones and zeros. “This system changes its conductance in an analog way, continuously, as the composition of the material changes,” explained Shi. “It would be rather challenging to use CMOS, the traditional circuit technology, to imitate a synapse, because real biological synapses have a practically unlimited number of possible states – not just ‘on’ or ‘off.'”

Co-researcher Sieu D. Ha (right, in pic) added that the synaptic transistor offers another advantage: non-volatile memory, which means even when power is interrupted, the device remembers its state.

From an engineering perspective, the team believes the nickelate system is well positioned for seamless integration into existing silicon-based systems. But for now, the limitations relate to the size of the device, which affects its speed. “In our proof-of-concept device, the time constant is really set by our experimental geometry,” says Ramanathan. “In other words, to really make a super-fast device, all you’d have to do is confine the liquid and position the gate electrode closer to it.” The team is already working with microfluidics experts to investigate possible fabrication techniques. They have also received funding to work with Harvard’s Lakshminarayanan Mahadevan to explore the integration of synaptic transistors into bioinspired circuits.