You are here: Home › Climate Change › News › Mammals may shrink with warming climate
By Will Parker on November 3, 2013 in Climate Change, News 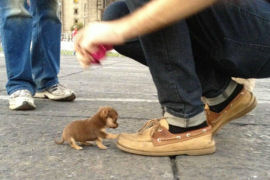 Researchers have long known that mammals became much smaller during a period of warming called the Paleocene-Eocene Thermal Maximum (PETM), about 55 million years ago. It was, however, unclear exactly what kind of link existed between the dwarfism and the warming. Now, Philip Gingerich and his colleagues have found evidence that mammalian “dwarfing” also occurred during a separate, smaller global warming event that occurred about 2 million years after the PETM.

The PETM lasted about 160,000 years, and global temperatures rose an estimated 9 to 14 degrees Fahrenheit at its peak. The smaller, later event analyzed in the latest study, known as ETM2 (Eocene Thermal Maximum 2), lasted 80,000 to 100,000 years and resulted in a peak temperature increase of about 5 degrees Fahrenheit.

“The fact that it happened twice significantly increases our confidence that we’re seeing cause and effect, that one interesting response to global warming in the past was a substantial decrease in body size in mammalian species,” said Gingerich.

He and his team presented their findings at the annual meeting of the Society of Vertebrate Paleontology in Los Angeles last week. Much of the work was based on mammalian tooth and jaw fossils (used as a proxy for body size) collected from Wyoming’s Bighorn Basin.

The researchers found that body size decreased during ETM2, but not as much as the dwarfism seen in PETM fossils. “A lineage of early horses the size of a small dog, called Hyracotherium, experienced a body-size decrease of about 19 percent during ETM2,” explained Gingerich. “The same horse lineage showed a body-size decrease of about 30 percent during the PETM. After both events, the animals rebounded to their pre-warming size.”

Based on this, the researchers suggest that the extent of mammalian dwarfism may be related to the magnitude of the hyperthermal event. They also speculate that mammalian dwarfing could be a response to the lower nutritional value of plants grown under elevated carbon dioxide levels. Under such conditions, plants grow quickly but are less nutritious than they would normally be. Animals eating such plants might adapt by becoming smaller over time. “Evidence from the ETM2 fossils is consistent with that hypothesis, and research on the topic is ongoing,” Gingerich said.

The researchers concluded that decreased body size “seems to be a common evolutionary response” by mammals to extreme global warming events, known as hyperthermals, “and thus may be a predictable natural response for some lineages to future global warming.”