You are here: Home › News › Space › Ancient asteroid caused global firestorm on Earth
By Will Parker on March 28, 2013 in News, Space 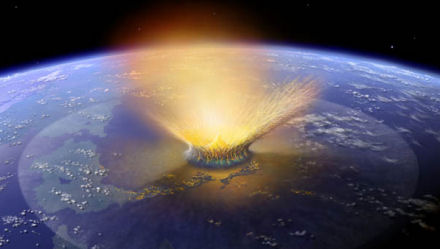 A new analysis of conditions after a Manhattan-sized asteroid slammed into Mexico in the dinosaur era indicates the event triggered a global firestorm that would have burned every twig, bush and tree on Earth and led to the extinction of 80 percent of all Earth’s species.

The new research, from the University of Colorado Boulder, was published this week in the Journal of Geophysical Research-Biogeosciences.

Led by Douglas Robertson, the research team used simulations to show that re-entering ejected material from the impact would have heated the upper atmosphere enough to glow red for several hours. Robertson said the temperature around the planet would have been around 2,700 degrees Fahrenheit – killing every living thing not sheltered underground or underwater.

The new analysis relied on charcoal sedimentation at the Cretaceous-Paleogene boundary some 66 million years ago when the cataclysmic fires are believed to have occurred. “Our data show the conditions back then are consistent with widespread fires across the planet,” said Robertson. “Those conditions resulted in 100 percent extinction rates for about 80 percent of all life on Earth.”

According to the researchers, the conditions leading to the global firestorm were set up by the vaporization of rock following the impact, which condensed into sand-grain-sized spheres as they rose above the atmosphere. “As the ejected material re-entered Earth’s atmosphere, it dumped enough heat in the upper atmosphere to trigger an infrared heat pulse so hot it caused the sky to glow red for several hours,” explained Robertson.

The searing conditions likely ignited tinder, dead leaves, and pine needles. For a person on Earth back then, it would have been like sitting in a broiler oven for two or three hours, said Robertson. The amount of energy created was mind-boggling, he added. “The total amount of infrared heat was equal to a 1 megaton bomb exploding every four miles over the entire Earth.”