You are here: Home › News › Space › Milky Way’s black hole in asteroid feeding frenzy
By Will Parker on February 9, 2012 in News, Space 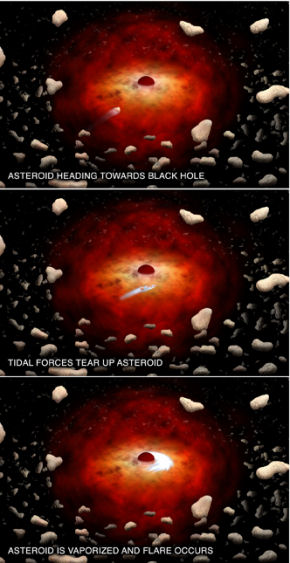 The X-ray flares that are observed on a daily basis from the giant black hole at the center of the Milky Way may represent the demise of asteroids plunging into the singularity, according to an analysis of data from NASA’s Chandra X-ray Observatory.

A new report appearing in the Monthly Notices of the Royal Astronomical Society notes that for several years Chandra has detected X-ray flares about once a day from the supermassive black hole known as Sagittarius A* (Sgr A*). The flares’ brightness ranges from a few times to nearly one hundred times that of the black hole’s regular output. The flares have also been seen in infrared data from the Very Large Telescope in Chile.

“People have had doubts about whether asteroids could form at all in the harsh environment near a supermassive black hole,” said Kastytis Zubovas, lead author of the report. “It’s exciting because our study suggests that a huge number of them are needed to produce these flares.”

Zubovas, from the University of Leicester, hypothesizes that there is a cloud around Sgr A* containing trillions of asteroids and comets stripped from their parent stars. Any of these bits of space flotsam passing within about 100 million miles of the black hole would be torn into pieces by the tidal forces from the singularity. These fragments would then be vaporized by friction as they pass through the hot, thin gas flowing onto Sgr A*, akin to a meteor heating up and glowing as it falls through Earth’s atmosphere. A flare is produced and the remains of the asteroid are swallowed by the black hole.

“An asteroid’s orbit can change if it ventures too close to a star or planet near Sgr A*,” said study co-author Sergei Nayakshin, also of the University of Leicester. “If it’s thrown toward the black hole, it’s doomed.”

The astronomers estimate that it would take asteroids larger than about six miles in radius to generate the flares observed by Chandra. Meanwhile, Sgr A* also may be consuming smaller asteroids, but these would be difficult to spot because the flares they generate would be fainter.

These results reasonably agree with models estimating of how many asteroids are likely to be in this region, assuming that the number around stars near Earth is similar to the number surrounding stars near the center of the Milky Way.

The report also notes that planets thrown into orbits too close to Sgr A* would also be disrupted by tidal forces, although this would happen much less frequently than the daily asteroid feast. Such a scenario may have been responsible for a century-old X-ray brightening of Sgr A* by about a factor of a million. While this event happened many decades before X-ray telescopes existed, Chandra and other X-ray observatories have seen evidence of an X-ray “light echo” reflecting off nearby clouds, providing a measure of the brightness and timing of the flare.