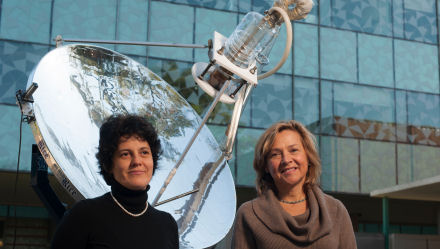 Using light-capturing nanoparticles, Rice University researchers have achieved an impressive 82 percent conversion efficiency of sunlight directly into steam; a breakthrough they say will create highly cost-effective solutions for desalination, water purification and electricity generation. Detailing their work in the journal ACS Nano, the researchers say the solar steam method is so effective it can even produce steam from iced water.

Solar steam appears to have a significant edge over photovoltaic type solar cells: according to the researchers, 82 percent of sunlight went directly to generating steam, yielding an overall 24 percent energy efficiency of the steam generation process. Photovoltaic solar panels, by comparison, typically have an overall energy efficiency around 15 percent.

While solar energy is generally thought of in terms of electrical power, the researchers say that is only a small part of the new technique’s potential. “This is about a lot more than electricity,” said Naomi Halas (pictured at right), the lead scientist on the project. “With this technology, we are beginning to think about solar thermal power in a completely different way.”

About 90 percent of the planet’s electricity is produced from steam (created by fossil fuels) and steam is also used to sterilize, prepare food, and to purify water. Most industrial steam is produced in large boilers, but Halas said solar steam’s efficiency could allow steam generation to become economical on a much smaller scale.

Hallas explains that the efficiency of solar steam is due to the light-capturing nanoparticles that convert sunlight into heat. When submerged in water and exposed to sunlight, the particles heat up so quickly they instantly vaporize water and create steam.

“We’re going from heating water on the macro scale to heating it at the nanoscale,” she explained. “Our particles are very small – even smaller than a wavelength of light – which means they have an extremely small surface area to dissipate heat. This intense heating allows us to generate steam locally, right at the surface of the particle, and the idea of generating steam locally is really counterintuitive.”

To show just how counterintuitive, Rice researcher Oara Neumann (pictured left) videotaped a solar steam demonstration in which a test tube of water containing light-activated nanoparticles was submerged into a bath of ice water. Using a lens to concentrate sunlight onto the near-freezing mixture in the tube, Neumann showed she could create steam from nearly frozen water.

Neumann expects the first uses of the new technology will not be for electricity generation, but rather for sanitation and water purification in developing countries. “Solar steam is remarkable because of its efficiency,” said Neumann. “It does not require acres of mirrors or solar panels. In fact, the footprint can be very small. For example, the light window in our demonstration autoclave was just a few square centimeters.”

Inexpensive, compact solar steam devices could soon be rolled out to developing countries, according to Neumann. Rice engineering undergraduates have already created a solar steam-powered autoclave that’s capable of sterilizing medical and dental instruments at clinics that lack electricity. Halas also won a Grand Challenges grant from the Bill and Melinda Gates Foundation to create an ultra-small-scale system for treating human waste in areas without sewer systems or electricity.