You are here: Home › Health › Genetics › News › DNA fluidity has “profound implications” for genetic screening, say Yale scientists
By Will Parker on November 19, 2012 in Genetics, News 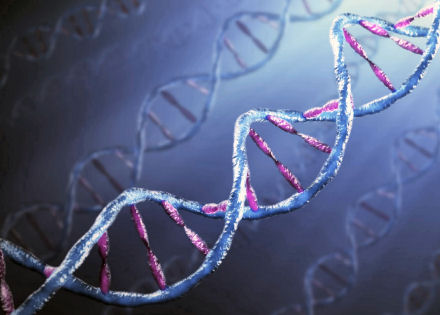 The idea that every cell in our body contains identical DNA is incorrect, with scientists discovering that genetic variations are widespread throughout the body’s tissues. The findings, say the researchers, have profound implications for genetic screening as they directly challenge the longstanding belief that the cells which govern our body’s functions have the same DNA sequence. A paper detailing the new research by scientists from Yale and Stanford appears in the journal Nature.

“We found that humans are made up of a mosaic of cells with different genomes,” said the study’s lead author Flora Vaccarino, from the Yale Child Study Center. “We saw that 30 percent of skin cells harbor copy number variations, which are segments of DNA that are deleted or duplicated. Previously it was assumed that these variations only occurred in cases of disease, such as cancer. The mosaic that we’ve seen in the skin could also be found in the blood, in the brain, and in other parts of the human body.”

In the past, some scientists have hypothesized that during development, when DNA is copied from mother to daughter cells, there could be deletions, duplications and changes in the sequence of the DNA, and an entire group of genes could be affected. It was this premise that Vaccarino’s team investigated.

While observing that the genome of iPS cells closely resembles the genome of skin cells from which they originated, the team could identify several deletions or duplications involving thousands of base pairs of DNA.

Performing additional experiments to understand the origin of those differences, the team showed that at least half of them pre-existed in small fractions of skin cells. These differences were revealed in iPS cells because each iPS line is derived from one, or very few, skin cells. Vaccarino said these iPS lines could act as a magnifying glass to see the mosaic of genomic differences in the body’s cells.

“In the skin, this mosaicism is extensive and at least 30 percent of skin cells harbor different deletion or duplication of DNA, each found in a small percentage of cells,” explained Vaccarino. “The observation of somatic mosaicism has far-reaching consequences for genetic analyses, which currently use only blood samples. When we look at the blood DNA, it’s not exactly reflecting the DNA of other tissues.”

“This is a huge amount of cell-to-cell genetic variation,” added co-researcher Alexander Urban, from Stanford, who in related research examined copy number variations (CNVs) in kidney, pancreas, and liver tissues. “Rather than monoliths, our bodies may be mosaics composed of cells whose genomes differ. What we do not know is whether or when these differences are dangerous, irrelevant or beneficial.”

Urban speculates that this may depend on the organ. “The more complicated something is, the more ways there are that something could go wrong with it. The brain is a particularly complicated organ. CNVs affecting cells in particular brain structures or areas could be playing a role in complex neurodevelopmental disorders such as schizophrenia and autism,” he concluded.