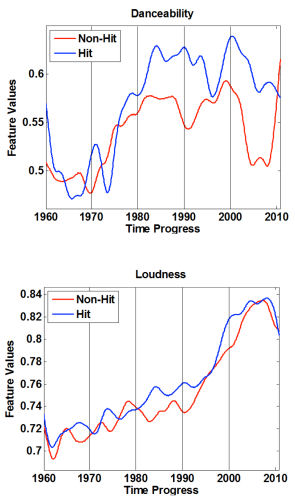 Predicting the popularity of a pop song could be achieved by using state-of-the-art machine learning algorithms, say University of Bristol (UK) computer scientists who have created software to interpret the various musical factors that make a song a hit. The research team, led by Dr Tijl de Bie, have created thehttp://scoreahit.com/ website which details their work and provides an analysis of pop music’s evolution over the years.

Previously, researchers at Emory University had worked on predicting the likelihood of a song’s success using MRI scans from the brains of music listeners. Eschewing the human component, the new software makes use of musical features such as, tempo, time signature, song duration and loudness, as well as more complex traits such as harmonic simplicity, chord sequence and how “noisy” the song is.

The Bristol team found they could classify a song into a “hit” or “not hit” with an accuracy rate of 60 percent; specifically, whether a song will make it to the top five, or if it will never reach above position 30 on the top 40 singles chart.

“Musical tastes evolve, which means our ‘hit potential equation’ needs to evolve as well. Indeed, we have found the hit potential of a song depends on the era. This may be due to the varying dominant music style, culture and environment,” noted De Bie, a senior lecturer in Artificial Intelligence.

Among the trends identified were:

Related:
Discuss this article in our forum
Study identifies key aspects of music that evoke emotions in brain
This Is Your Brain On Jazz
Human music and speech biologically linked
Schizophrenic computer models mental illness

Funko Pop Music, Icons & Sports Figures YOU PICK THEM Over 150 to Choose From