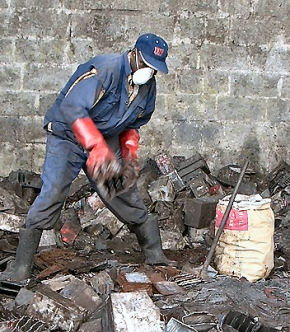 Solar power has a dark side. In developing countries with less robust electrical grids, solar power is heavily reliant on traditional lead batteries for local electrical storage and a new paper suggests widespread lead pollution may be a side-effect. The paper’s author, University of Tennessee environmental engineer Chris Cherry, says there is the potential to release more than 2.4 million tons of lead pollution in China and India. The paper appears in the journal Energy Policy.

Lead poisoning is associated with numerous adverse health effects, including damage to the central nervous system, the kidneys, the cardiovascular system and the reproductive system. In children, blood lead concentration is associated with learning impairments and behavioural problems.

Cherry’s estimates, based on official government plans for deploying solar power, show that by 2022, lead pollution from investments in solar power will be equivalent to one-third of current global lead production. His analysis comes on the heels of reports of a large number of mass lead poisoning incidents around lead battery recycling and manufacturing plants in China and the announcement that the country recently closed 583 of these facilities.

The battery industry is the largest consumer of lead, using approximately 80 percent of global lead production. Lead battery manufacturing is growing rapidly in much of the developing world to meet demand for batteries for solar power and other applications.

Cherry says the solar industry has to step up and take responsibility for ensuring that their lead battery suppliers are operating with adequate controls. “Investments in environmental controls in the lead battery industry, along with improvements in battery take-back policies, are needed to complement deployment of solar power in these countries.”

While based on plans articulated by China and India, Cherry believes the projections are likely to be repeated throughout much of the developing world, such as in Africa.

Modern humans healthier thanks to Neanderthal nookie
Gettin’ drunk and fallin’ down; who cares?