You are here: Home › News › Scientists’ frustration with frustration at an end
By Will Parker on June 3, 2010 in News 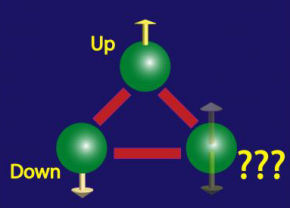 Frustration is usually something best avoided. But for scientists, understanding how “frustrated” systems behave is the key to understanding a host of puzzling phenomena that affect systems from neural networks and social structures to protein folding and magnetism. In such systems, frustration describes the interacting components when they cannot settle into a state that minimizes each interaction. It has been extremely difficult to study in the past because even systems with few components have interactions so complex that they cannot be modeled effectively on even the most powerful computers. Now, however, a team of researchers has simulated frustration in a quantum system in a precisely controllable experimental arrangement. Reporting their findings in Nature, the scientists also detail how frustration is related to the bizarre quantum-mechanical condition known as entanglement.

“Frustration occurs when one or more elements of a system are acted on by competing forces in a way that makes it impossible to reach one ‘ground’ state, or lowest-energy arrangement, of all individual interactions,” says research leader Chris Monroe, of the Joint Quantum Institute (JQI). “The simplest example is a system of three objects such as atoms, each of which has a spin that can have only one of two values – either ‘up’ or ‘down’ – and nothing in between.” 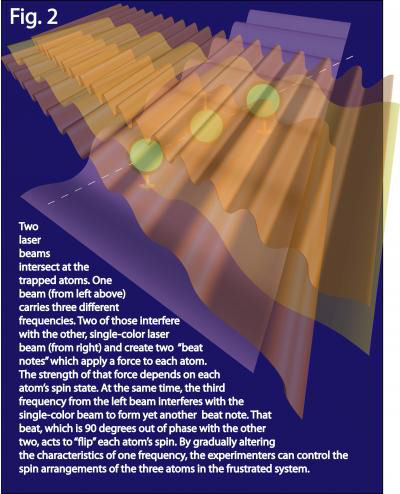 Monroe’s team set out to investigate those questions by creating a fully controllable version of the smallest possible frustrated magnetic network, consisting of three spins. They trapped three atoms of ytterbium in a vacuum chamber and aligned them so that the atoms lined up side by side like beads on a string [Figure 2]. Any three-object quantum system of this kind, in which each object can only be in one or the other of two states, will have eight possible variations. For example, three coins flipped simultaneously can yield all heads, all tails or six different combinations in between. The goal of the JQI researchers was to find out what set of conditions produced each of those eight combinations on demand.

They accomplished this by aiming two separate laser beams (traveling at right angles to one another) which intersected at the point where they hit the atoms. One beam consisted of a single frequency; the other had two additional frequencies superimposed on the laser carrier beam. Where the beams intersected, the various frequencies would alternately cancel and reinforce one another, creating a pattern of multiple “beat notes.”

These beat notes had two effects on the atoms, occurring simultaneously. One produced the equivalent of a magnetic field, which could cause the atoms’ spins to flip – that is, to switch from north pole up to south pole up. The other beat notes, in combination, gave each atom a motional “kick,” the effect of which was different depending on each atom’s spin state. Because each atom influences its neighbors’ spins according to their proximity, the kicks provided a second set of controls on the system [Figure 3]. 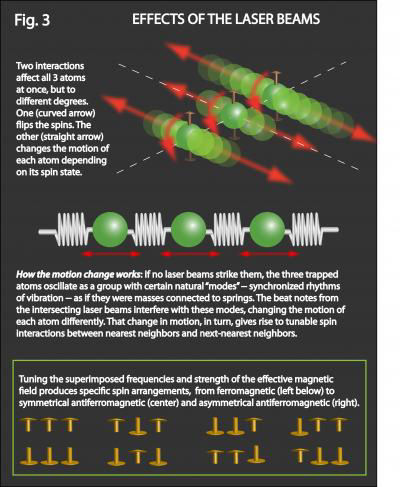 “We have exquisite control over all aspects of this interacting system of three magnetic spins. We can make them ferromagnetic [wanting to align their ‘north’ poles the same way] or antiferromagnetic [wanting to align in opposite directions], and we can control the relative strengths of the three interactions. What’s most exciting is that we can scale this system up to many more spins – perhaps 100 or more – using almost exactly the same apparatus. By controlling these magnetic interactions with only 25, or so, spins, we can create states that cannot be modeled with any conventional computer. What we have is a restricted type of quantum computer called a ‘quantum simulator,’ that was first proposed by Richard Feynman in the early 1980s,” explained Monroe.

“Entanglement is a concept that is at the heart of the strangest features of quantum mechanics,” Monroe says, “and it is easy to come up with simple examples of entanglement, say between two interacting spins. This is basically what Einstein did in 1935 in trying to show that quantum physics was just too weird to be right. But entanglement between lots of particles is a murky concept – there’s not even a unique way to quantify entanglement in big systems. For a huge amount of spins, like in a macroscopic magnetic material, there are very strange states where the spins form ‘domains.’ And even at zero temperature there can be a great deal of randomness [entropy] in the alignment of those spins. This is related to the fact that the spins can be frustrated. And with so many compromises, there are many possible spin configurations. In our experiment, we make a clear connection between frustration and how it leads to an extra degree of entanglement, in the smallest possible system of three spins.”