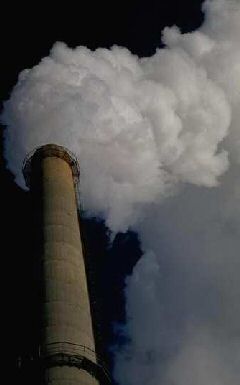 University of California and Purdue University researchers believe that naturally-occurring atmospheric chemicals reacting with sunlight are breaking down smog and other pollutants at a faster rate than once believed. Researchers Amitabha Sinha, Jamie Matthews and Joseph Francisco used sensitive laser techniques to study natural air cleaners called OH radicals. Their research, appearing in theProceedings of the National Academy of Sciences, is the first to study smog-destroying OH radicals at low ultraviolet wavelengths.

Much of the hydrocarbon pollutants pumped into the atmosphere by humans result from burning organic matter such as wood or fossil fuels. The atmosphere has three main ways to cleanse itself of such pollutants. Two are relatively direct: water droplets in clouds absorb and rain them out of the atmosphere or sunlight breaks the molecules apart. “The third way is the one we are concerned with here, the way that involves breaking these hydrocarbons down chemically,” said Francisco. “For that, the atmosphere relies on a reactive group of chemicals called OH radicals that attach themselves to hydrocarbons and rip them into inert pieces.” OH radicals arise naturally from many atmospheric constituents.

The effect they have on pollution has long been factored into models that describe the atmosphere and attempt to predict how it will react to increasing quantities of hydrocarbon pollutants, which generate smog. But these models do not always function well, in part because OH radicals are in some ways an unknown quantity. “Thanks to an innovative laser technique that at last allowed us to observe these chemicals in action, we now theorize that the atmosphere may produce up to 20 percent more OH radicals from these chemicals than we once thought,” said Francisco. “We now have a better understanding of an atmospheric process that could be giving our pollution-weary lungs more breathing room.”

“This study is important because it shows that the atmosphere could be generating far more OH radicals than previously thought and accounted for by current models, which neglect the new chemistry we observe,” said researcher Sinha. “It could imply that the atmosphere is more effective at breaking down pollution than models have shown. We hope the results will improve our understanding of how the atmosphere works.” Sinha cautioned, however, that the results do not mean we can now safely ignore atmospheric pollution. “This study in no way implies that we are out of the woods with regard to atmospheric pollution,” he said. “What it means is that we need to do a much more careful job with our measurements in order to accurately account for all sources of OH radicals present in the air.”

The researchers used a laser technique that allowed the team to look at the OH radical-producing molecules in a new way. More precisely, it allowed them to observe a portion of the molecules’ spectrum which had been something of a blind spot for atmospheric scientists, who often detect chemical reactions by perceiving the telltale light frequencies that certain reactions are known to emit or absorb. Many sources of OH radicals strongly absorb UV light, making them easily detectable. However, the weak absorptions in the lower region of the ultraviolet spectrum, from wavelengths of about 360 to 630 nanometers, has been more challenging. “It’s usually difficult to monitor what’s going on in that region of the spectrum because the molecules of interest typically have weak absorption features there, so they’re tough to see,” said Sinha. “However, there is a lot of solar radiation coming down over this wavelength region, so even weak absorptions become important. The upshot is that a lot of atmospheric models have ignored these weak absorption features altogether, assuming that because nothing can be seen using conventional techniques, nothing must be happening.”

The new sensitive laser technique, called “action spectroscopy,” however, enabled the team to characterize the minute quantities of radiation absorbed by a substance called methyl hydroperoxide when it breaks up in sunlight and forms OH radicals. Methyl hydroperoxide is one of the substances that can absorb light in the lower UV spectrum, and the team theorizes that the sensitive laser technique, called action spectroscopy, could reveal OH radical production from other chemically related molecules as well.