You are here: Home › News › An Inconvenient Galaxy
By Will Parker on January 9, 2008 in News 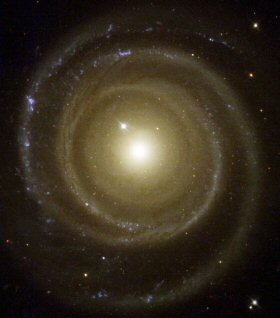 The discovery of two new components within a puzzling spiral galaxy confirm it must have a pair of arms winding in the opposite direction than that of most other galaxies, according to a study published in the Astronomical Journal.

“While the existence of a galaxy with a pair of ‘backward’ arms may seem like an inconvenient truth to many, our latest analysis indicates it is, nonetheless, a reality,” says Gene Byrd, professor of astronomy at The University of Alabama.

The galaxy, known as NGC4622, lies 200 million light years away in the constellation Centaurus. Spiral arm pairs seen in galaxies are thought to trail, meaning they wind outward, opposite the direction of rotation of the disk material. Leading arms, such as the pair reported by the astronomers for NGC4622, do the opposite, opening outward in the same direction as the rotation of the galaxy’s disk.

In 2002, team members first published, to great skepticism, results from a previous method that indicated the galaxy had a leading pair of spiral arms. Other astronomers were skeptical of the 2002 announcement, in part, because the galaxy disk is only tilted about 19 degrees from face-on and because clumpy dust clouds might be concentrated on one side of the disk, creating misleading results. In response, the team’s new Fourier component method is actually assisted by the small tilt, and the effects of dust are not used in the latest analysis.