You are here: Home › News › Polarization Technique Used To “See” Exoplanet
By Will Parker on January 2, 2008 in News 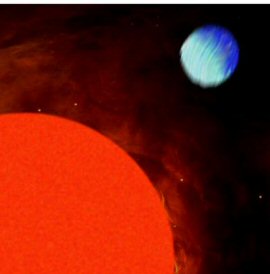 For the first time, astronomers have been able to detect and monitor the reflected visible light that is scattered in the atmosphere of an exoplanet.

Employing techniques similar to how sunglasses filter away reflected sunlight to reduce glare, a team of scientists led by Professor Svetlana Berdyugina of ETH Zurich’s Institute of Astronomy were able to extract polarized light to enhance the faint reflected starlight “glare” from an exoplanet. As a result, the scientists could infer the size of its swollen atmosphere. They also directly traced the orbit of the planet, a feat of visualization not possible using indirect methods such as gravitational “wobble” detection.

The exoplanet under study circles the dwarf star HD189733 in the constellation Vulpecula and lies 60 light years from the Earth. Known as HD189733b, the exoplanet is so close to its parent star that its atmosphere expands from the heat. Until now, astronomers have never seen light reflected from an exoplanet, although they have deduced from other observations that HD189733b probably resembles a “hot Jupiter” – a planet orbiting extremely closely to its parent star. Unlike Jupiter, however, HD189733b orbits its star in a couple of days rather than the 12 years it takes Jupiter to make one orbit of our sun.

Berdyugina’s team used the 60cm KVA telescope in La Palma, Spain to obtain the polarimetric measurements of the star and its planet. They discovered that polarization peaks near the moments when half of the planet is illuminated by the star as seen from the Earth. Such events occur twice during the orbit, similar to half-moon phases.

The polarization indicates that the scattering atmosphere is considerably larger (more than 30 percent) than the opaque body of the planet seen during transits. The astronomers speculate that the scattering most probably consists of particles smaller than half a micron, perhaps tiny dust grains or water vapor. Such particles effectively scatter blue light – in exactly the same scattering process that creates the blue sky of the earth’s atmosphere.

“The polarimetric detection of the reflected light from exoplanets opens new and vast opportunities for exploring physical conditions in their atmospheres,” Professor Svetlana Berdyugina said. “In addition, more can be learned about radii and true masses, and thus the densities of non-transiting planets.”