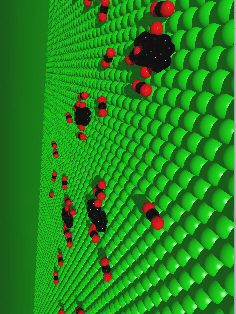 Nano-buffs may recall the work done by University of California Riverside’s Ludwig Bartels, in designing a molecule that can move in a straight line on a flat surface. Now, Bartels’ team, reporting in Science Express, say they have found a way to attach cargo: in this instance, two carbon dioxide (CO2) molecules, making the nano-walker a molecule carrier.

“This is an unprecedented step forward towards the realization of molecular-scale machinery,” said an excited Bartels. “Our experiments show a means to transport molecules reliably. This will become as important to the molecular machinery of the future as trucks and conveyor belts are for factories of today.”

The new molecular workhorse runs on a copper surface. It can pick up and release up to two CO2 molecules and carry them along its straight path. “Carrying a load slows the molecule down” explained Bartels. “Attachment of one CO2 molecule makes the carrier need twice as much energy for a step, and a carrier with two CO2s requires roughly three times the energy. This is not unlike a human being carrying heavy loads in one or both hands.”

The carrier molecule is anthraquinone, which consists of three fused benzene rings with one oxygen atom on each side. An organic compound, anthraquinone is widely used in the pulp industry for turning cellulose from wood into paper. It is also the parent substance of a large class of dyes and pigments. Its chemical formula is C14H8O2.

Bartels used a scanning tunneling microscope (STM) to obtain precise images of the carrier molecules in action. The experiments took place on a highly polished copper surface, cleaned so that only the desired molecules were present on it. An individual anthraquinone molecule appears in the STM as an almost rectangular feature with slightly rounded edges.

Check out some animations.